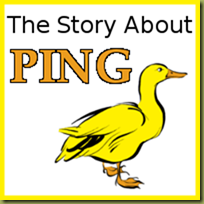 I’m so excited to really get into Five in a Row and really start rowing more books.  We’ve done a few books here and there, but we are now transitioning into FIAR as a major part of our curriculum!

Our first row was A Story About Ping.  I decided on this book because it’s the first in vol 1, and we happen to already own it.

I’ve included some printables to go along with the book – you’ll find the link at the bottom of the post!

We talked a lot about the art of the book today.  I tried to get the boys to notice the reflections in the water, but they thought the reflections were actually shadows.  This gave us a great opportunity to really explore reflections though!  We looked in the mirror, and other shiny surfaces (trashcan, oven, tin foil) and tried to see what objects reflected and what did not (wood, walls).  They were thrilled when the tin foil reflected!  All 3 of the boys got up very close to get a good look at themselves! 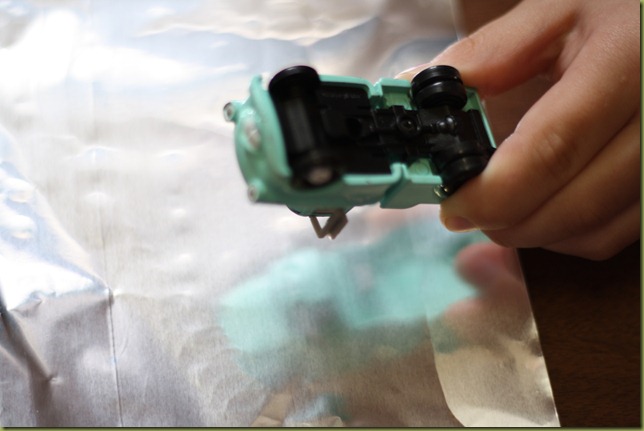 We did a simple art activity drawing ducks and then using squiggly lines to show the movement of the water.

We used this ‘How to Draw a Duck’ tutorial.  I wanted one that was simply enough for Royal AND Baloo, but still looked like a duck. 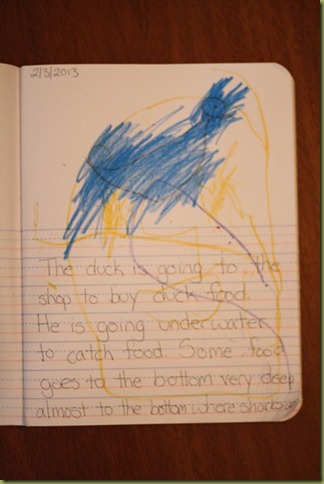 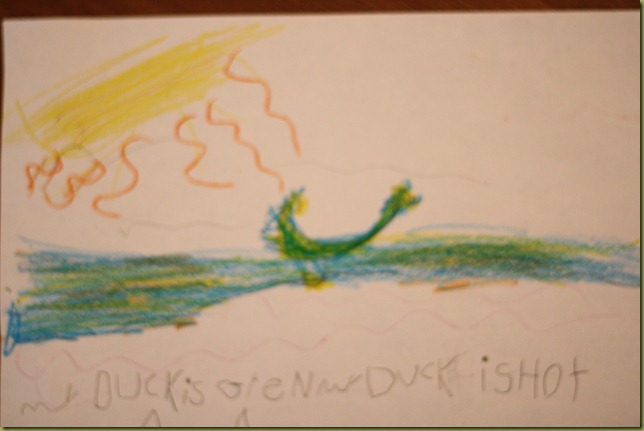 And Logi-Bear is never one to be left out.  I drew his duck and he spent a lot of time coloring! 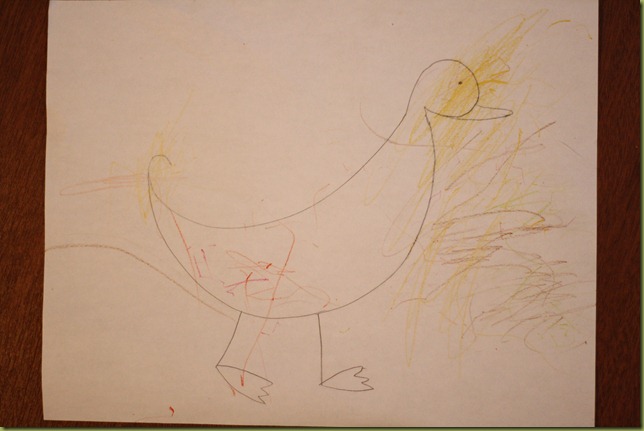 We decided to learn about China a little bit.  We started by locating China on the map.  Baloo also wanted to color the USA, locate exactly where we live, and determine how to get to China by boat.  We also drew the Yangtze River on a map of China, labeled some of the major cities, and wrote a few interesting facts about the Yangtze River. 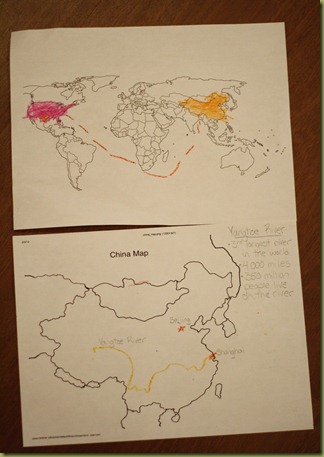 We colored the Chinese flag using the color-by-number in my The Story About Ping pack.  Royal wasn’t as interested, but he did try! 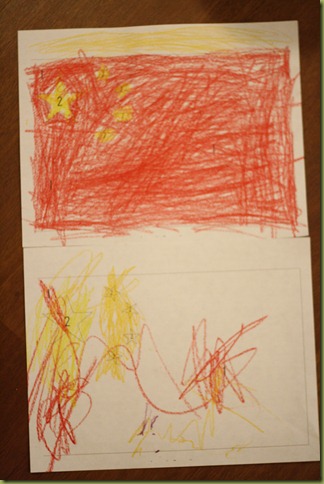 To make it a bit more personal I found each of the boys names in Chinese (We found our names in Chinese here.).  I copied the picture and using a photo editor made it an outline.  Then I printed our their names so we could color them in! 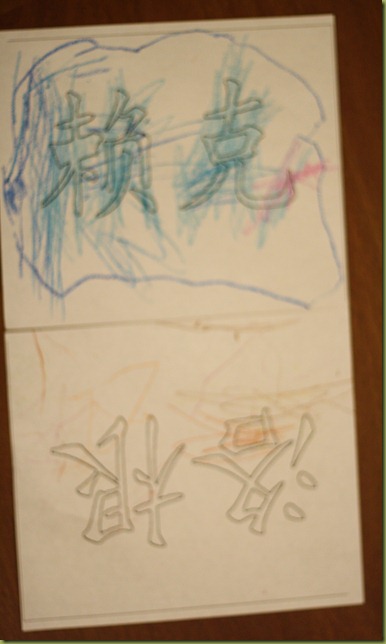 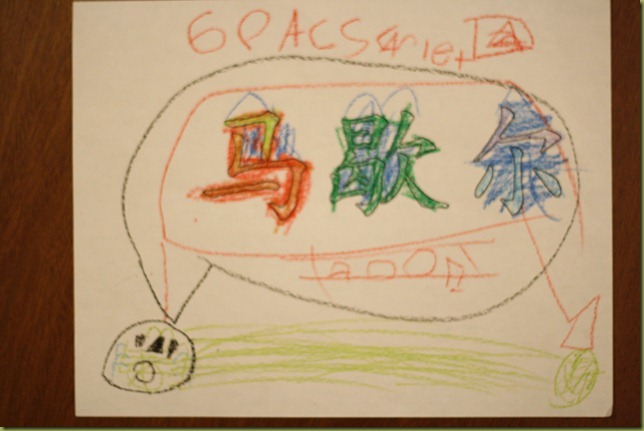 About halfway through our unit I finished the printables to go with the story.  We did a few of the sheets from each pack, but didn’t get pictures of them all.  Royal dot painted the Dd is for Duck dot marker page yellow. 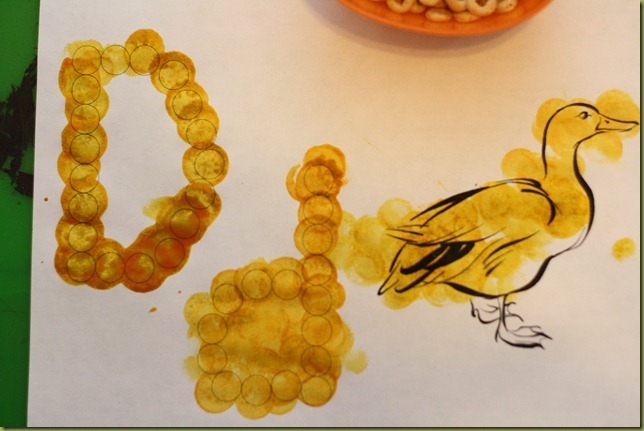 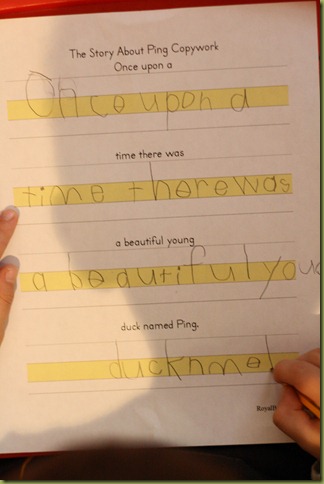 We decided to explore how the illustrator showed the reflection in the water.  I drew a few ducks on the top half of a some papers and got out the paint.  We painted the duck yellow, added a boat in brown, and painted the water around them.  Then we folded the paper in half for the reflection.  On this one we painted more water on the bottom after folding. 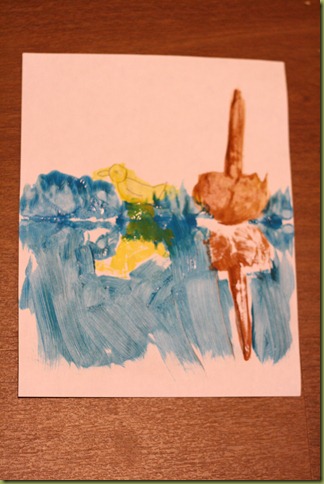 After reading the book, we started off with some story sequencing (as can be found in my The Story About Ping printable). 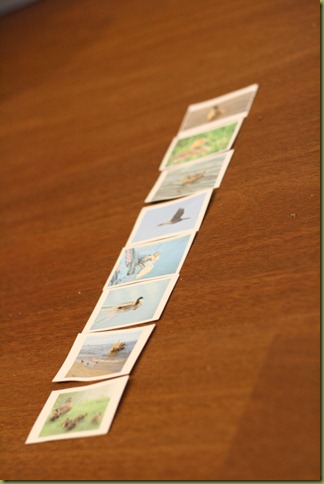 Baloo then read all the sentences and matched them to the pictures. 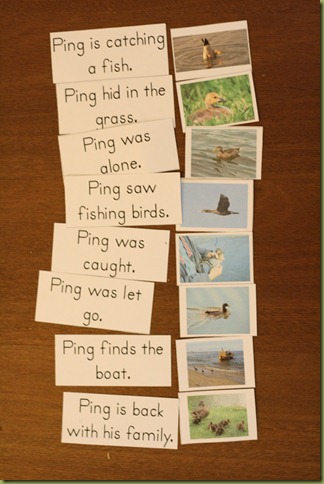 We labeled the parts to the duck, and looked up a few interesting facts about ducks.  We learned that not all ducks quack (in fact most don’t), that ducks don’t have nerves in their feet (so they can swim in cold water), and that they use a process called preening to spread oil over their feathers which makes them waterproof.

To illustrate the waterproof feathers we painted a duck and spread oil over half of the paint.  We let water drip all over the duck and compared the difference. 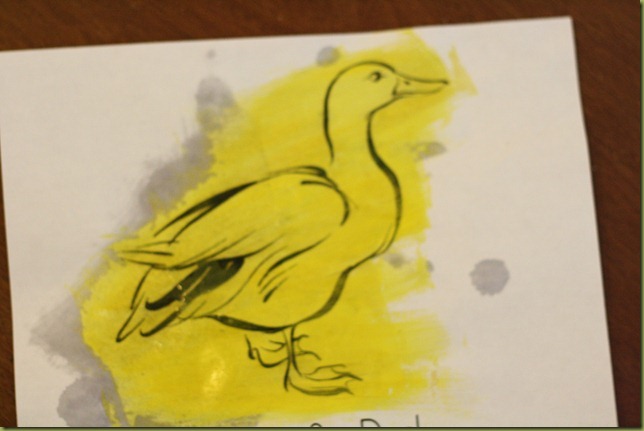 Where the oil was, the water beaded up and didn’t’ soak through.  Where they was no oil it just soaked in. (I got this idea from Delightful Learning) 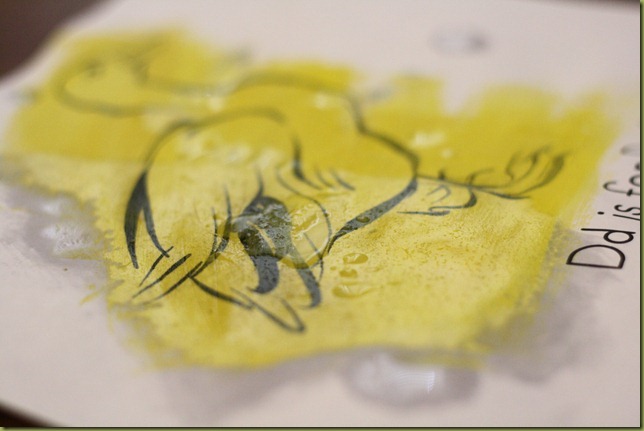 For lunch we made Egg Drop Soup (recipe was given to me by a facebook reader!  Thank you Julie!).  I had all 3 boys helped me stir, measure, and whisk so there are NO pictures.  The soup was delicious though!

Everything got a bit crazy around day 5 and we didn’t get any pictures.  We finished up using some of the printables in my pack though and read the book one more time.  We haven’t really been in a good routine with FIAR in the past.  On day 3 the boys were complaining about reading the same story so many times, but later the same day they were begging me to read it again! In the end, we had a great time rowing The Story About Ping and now it’s one of our favorite books!

We had a great time rowing The Story About Ping!  I can’t wait to get to our next book!

Go here to download the Story About Ping printables!

A quick note about printables to go along with FIAR books:
I do plan on making more printables for the books we row, especially books that I don’t find other resources for.  I take great care to make sure that my printables do not violate any copyrights with Five in a Row.  My printables alone would not be a substitute for following the Five in a Row curriculum.
I believe that part of the beauty of Five in a Row is it’s hands-on approach.  So, why did I make printables then?  We do need writing practice and some more concrete details and I think the books are great launching points!
At this point in time I do not have any more FIAR book printables in the works, but I will be working on more soon.

4 thoughts on “A Story About Ping–Learning With Literature”