Tomie dePaola is the author of the month for the Virtual Book Club and we couldn’t be more thrilled.  We’ve had the opportunity to read countless books from dePaola and have loved every single one of them.

Most recently we checked out Bill and Pete Go Down the Nile.  Bill is a crocodile and Pete is a bird (and also Bill’s toothbrush).  In this adventure they travel down the River Nile and see the sights (ie The pyramids and the Sphinx).

The crocodiles see so many sights along the River Nile that we had to make a story map.  We started by finding Africa and Egypt on a world map and noticing how far away they are from our home.

Next I had the boys draw a long river on a piece of paper and we decided the river would stand in for the River Nile.  As we read through the book we drew in the sights that Bill and Pete saw as they traveled down the river.

First was the Grand Hotel.

Following was the Sphinx and the Nile Queen (a ship) and the Pyramids.  I let Baloo (and Royal, as he wanted) copy the pictures from the book, or from pictures on the iPad, as necessary.

The book ends at the Royal Museum where a thief attempts to steal the Sacred Eye of Isis. 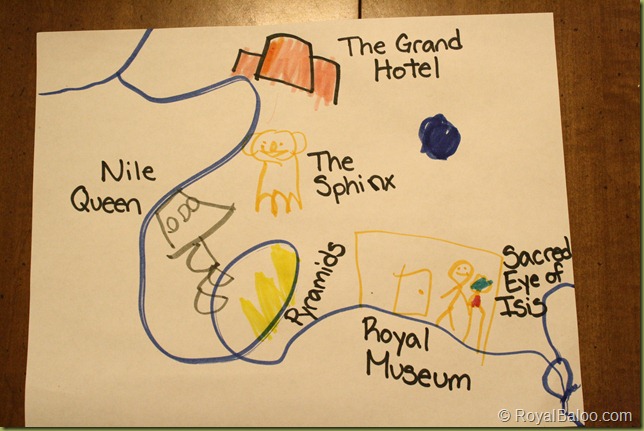 The boys loved learned a bit about Egypt and the sights along the Nile River!