When you hear ‘early humans’ what do you picture?

Or do you picture our ancestors who figured out how to tame fire, traveled across the world, made stone tools, created art, and so much more?

The goal of this unit study is to help our kids see the latter. Early humans weren’t dumb humans who didn’t know how to be civilized.  They were humans who were learning and inventing constantly. 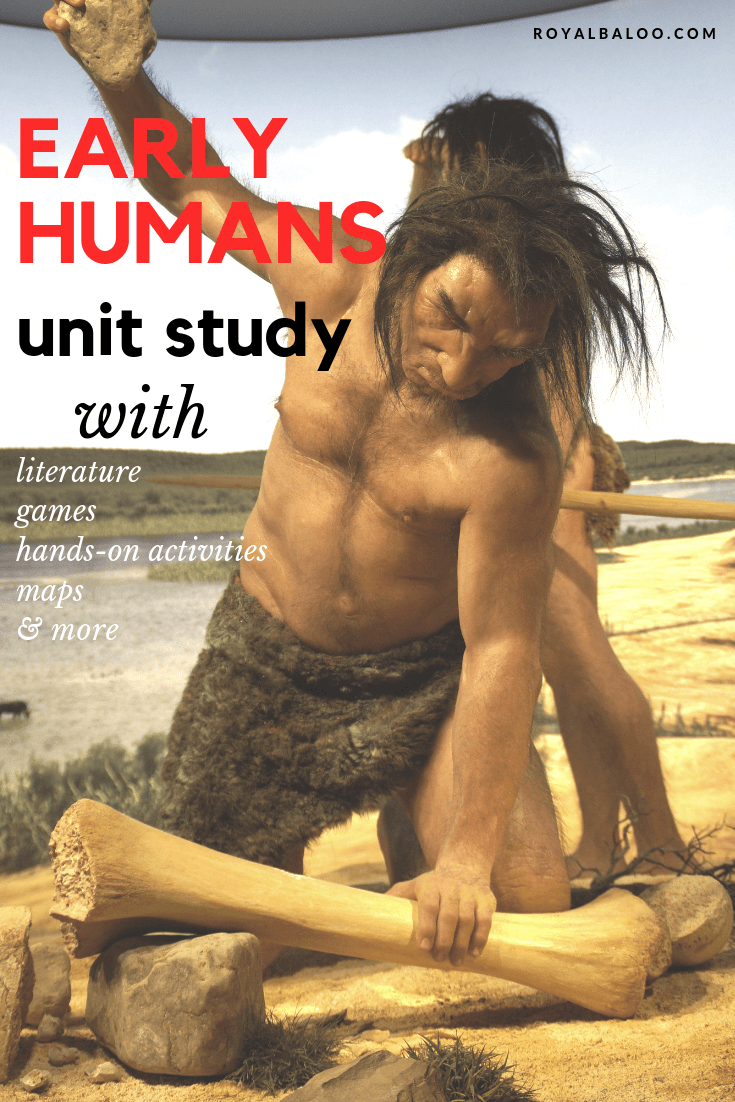 Get the Unit Study Here

I like my units to cover a few different subjects and this one is no different.

The unit itself is history based but also includes:

This is a literature-based hands-on unit study. What does that mean? It means that the focus is on books but I also suggest a lot of hands-on activities.

Things to Discuss About Early Humans

I like to present questions to my kids that we contemplate and then answer throughout the study. I believe this is the same idea behind ‘essential questions’. My goal with these questions is to present a few and let them latch onto which questions spark their interest.

I include discussion questions to go with each history unit. It’s my hope to get my kids thinking and not just absorbing information.

I wanted to include evolution in the early humans unit. But as soon as I got started I realized it fit under science much better. So this unit focuses on early humans and not how we became human.

A science-based evolution unit is on its way but not done yet.

Get the Unit Study Here

If you’re ready for the full Early Humans Unit Study – there are two ways to purchase!

Buy it on Teachers Pay Teachers

Buy it from the Royal Baloo store

And now I’d like to share a few resources to go with a great Early Humans Unit!

I have all of these books listed in an Amazon wishlist to look at easily.

The First Dog by Jan Brett

Maroo of the Winter Caves by Ann Turnbull

Extras for your Early Humans Unit

I’ll admit that I don’t usually buy toys to go with a homeschool unit. But sometimes the toys are irresistible and it doesn’t take much to convince me to buy them. Once my kids catch onto this, I’m done for.

LEGO ‘Caveman’ Set. I don’t like that so many early humans toys refer to them as caveman but it is what it is. I love the cave that they include with this set and I can never say no to LEGO.

Safari TOOB Evolution Set. This is just really freaking cool. I love the progression of our human ancestors shown so clearly.

I found two games that we haven’t tried but I hope we will be able to soon. Caveman and Stix and Stones. (Look for Stix and Stones elsewhere because it’s really expensive on Amazon)

Sometimes when I start a new topic with my kids I realize how much my own knowledge on that topic is lacking. I love to learn with my kids but I at least need a base layer of knowledge.

I’ve started looking for books for adults on the same topics so I can see what I’m getting into. This also helps so I might be able to answer some of the earliest questions or have an idea what to search for when questions pop up.

Or maybe I just want more information because learning is awesome.

My first recommendation for early humans is the book Sapeins by Yuval Noah Harari. It goes a lot into evolution and in depth sciece behind humans. It’s a great read though and very informative. There’s even a second book by the same author called Homo Deus.

Next is a series by NOVA called Becoming Human.