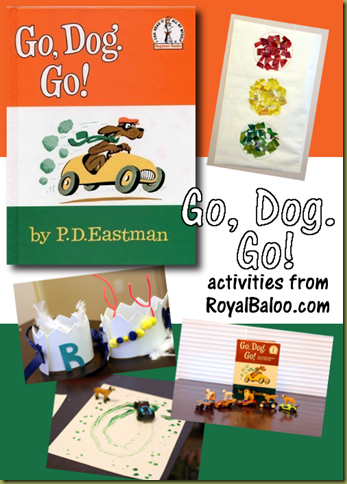 I was so excited that the Virtual Book Club author this month was Dr. Seuss, but then I just couldn’t pick a book.  At the beginning of the month we got out ALL of our Dr. Seuss books and started reading through them.  A few of them have become daily favorites again (The Lorax; Go, Dog. Go!; A Crack in the Track…) and I just couldn’t choose.  Royal has taken a particular liking to The Lorax and we’ve read it so much that he randomly breaks out quoting the story – word for word!  He loves to retell the story now!  Logi-Bear has actually been sitting down and requesting someone to read Go, Dog. Go! to him.  And the more we read it, the longer he will sit.  He won’t sit through the entire book yet, but we’ve gotten about 3/4 of the way though!

Anyway, we finally decided on Go, Dog. Go! because it seems to be a favorite of all 3 boys.  We’re all been sick this week (2 E.R. trips!!) so I went for something easy to set up, easy to make, and just fun to do.

We did some painting with dogs in cars!! 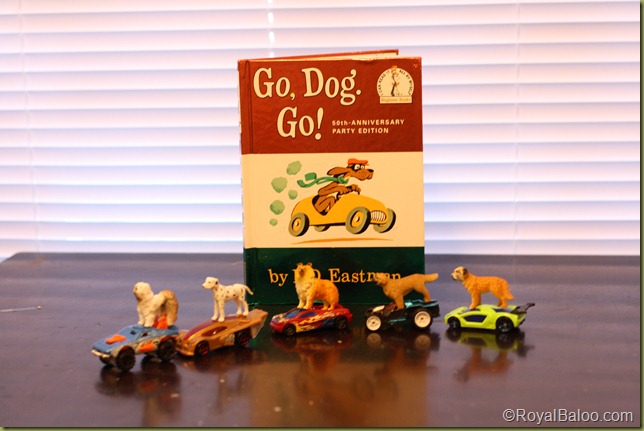 I set out red, yellow, and green (the colors of a stoplight) and a few dogs on cars for them to explore.  I used washable paint in hopes it would clean off easily (and it did!) 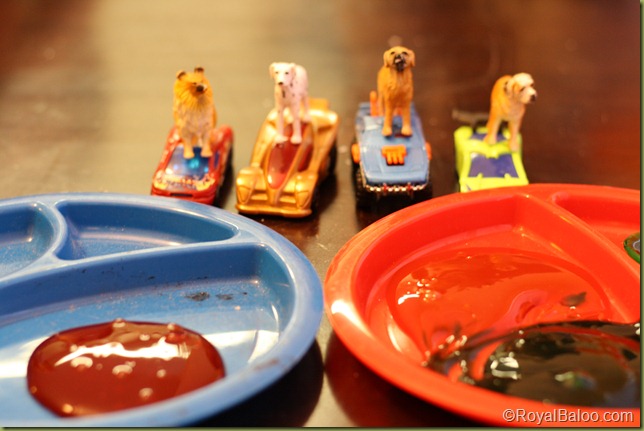 We’ve never painted with cars before so they were really lost at first.  I gave them a quick example of using the dog and the car to make prints.  Then they were off and running!
Baloo was really enjoying himself.  He ended up painting with the car until almost the entire page was green! 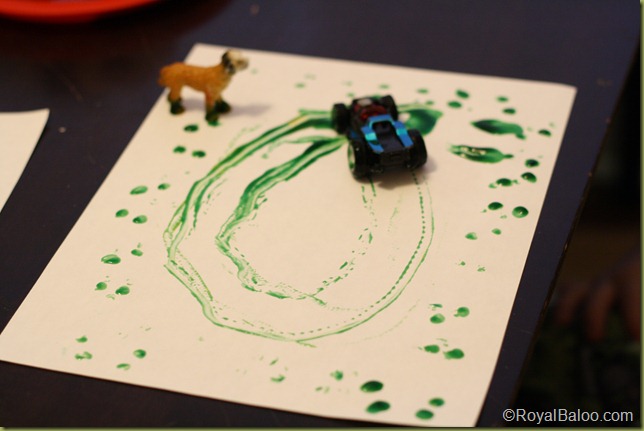 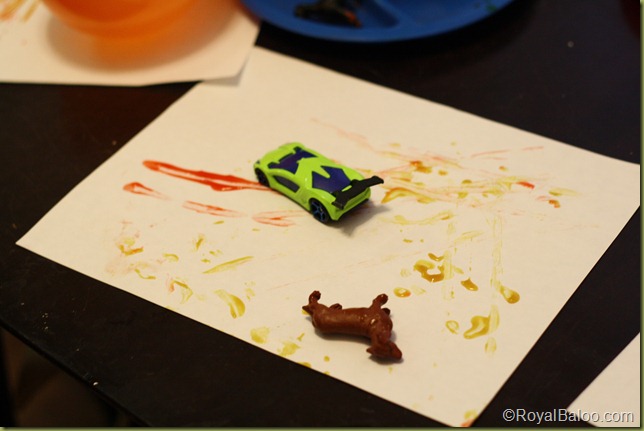 Royal has the best time of all though.  He played with the paint for a solid 45 minutes! 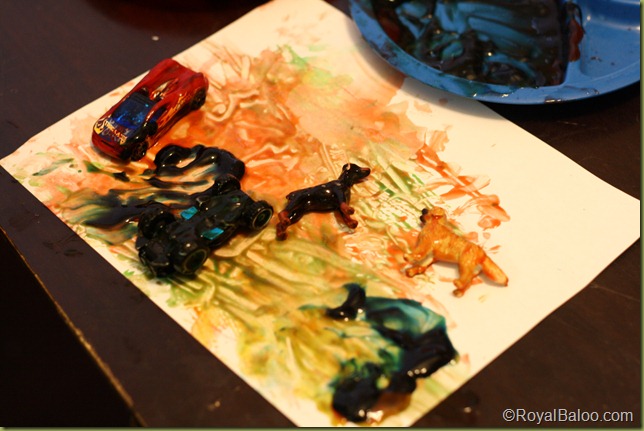 We decided to make a big stoplight too.  I have a bunch of magazines that we are done with and free for cutting up.  I went through and cut out red, yellow, and green (If we weren’t all sick and trying to keep this simple, I probably would have had them cut out the colors, or at least sort them.  Or we could have gone to Home Depot and bought paint chips!!)
I traced the circles using a round plate (No way I could have free-handed those circles!!) 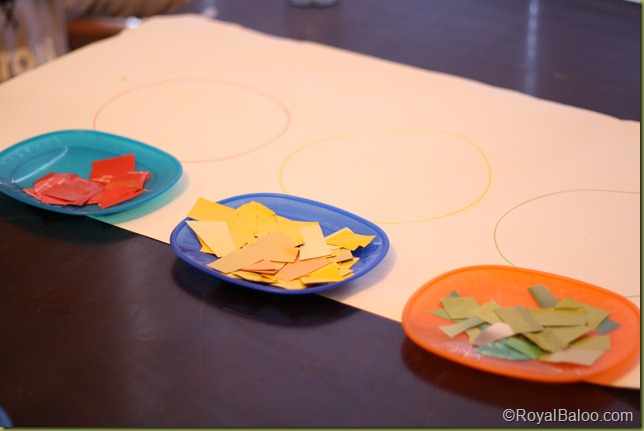 We covered the circles in glue and started adding the scraps of paper! 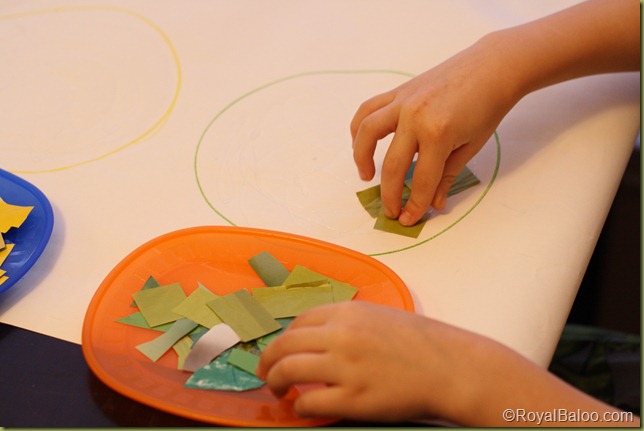 When we finished, we hung it up on the wall!  The boys immediately started playing a game of red light, green light, yellow light.  I didn’t catch all the rules, but they were running around, stopping when someone yelled RED, and crashing (a lot!). 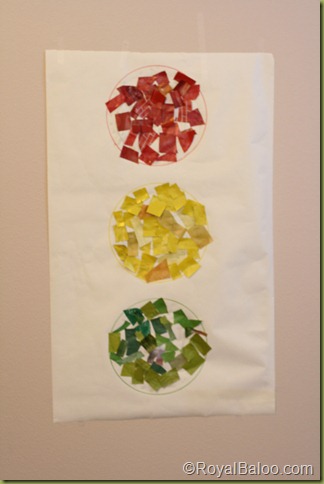 One of Baloo’s favorite parts of Go, Dog. Go! is the hats.  He cracks up laughing and each one.  So we had to make our own party hats like the last few pages in the book! 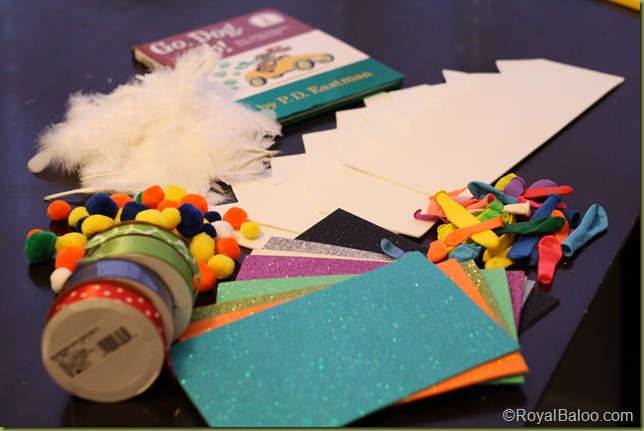 I got out as many funky craft supplies as we had on hand – ribbon, feathers, pom poms, balloons, pipe cleaners, and foam.  We used white foam sheets to make the hat part (and tied it together using ribbon). 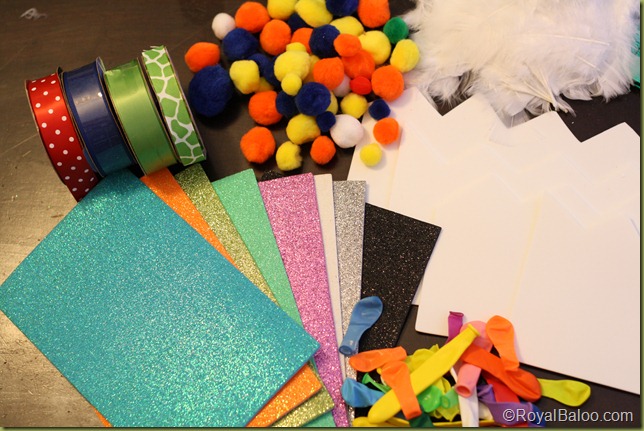 We ended up with a few slightly funky hats!!  The foam made them rather comfortable to wear, so they ended up playing with them on for a bit! 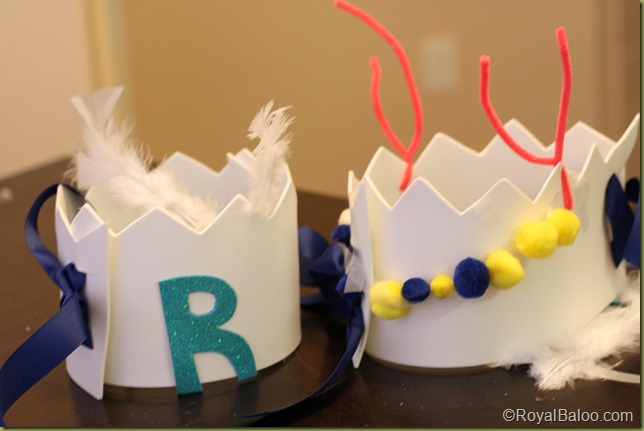 But then we had a mess to clean up…this is what happens when you let 3 little kids explore a lot of materials at the same time!! 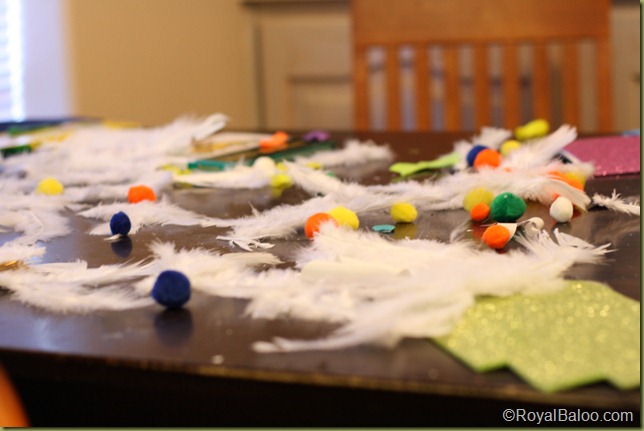 Make sure to check out the other amazing blogs participating in the Virtual Book Club!