Did you know studies show that clutter actually had an affect on our brain chemistry?  That sounds crazy, doesn’t it?  Yet, when people adopt a minimalist attitude, they have overwhelmingly positive reports.  More time with family, less stress, more money, etc.

We’ve been working on minimizing for a few months and oh my gosh, it is amazing.  I’m not halfway done but my time cleaning is easily cut in half.  The boys fought it at first but they quickly found themselves playing with their toys more and cleaning up their toys less.  Even my husband noticed – and you know that’s saying something.

As homeschoolers who are home often, having the home as a relaxing place is important to me.  I think any people who spend a lot of time at home would agree, not just homeschoolers (people who work at home or stay at home, for instance). 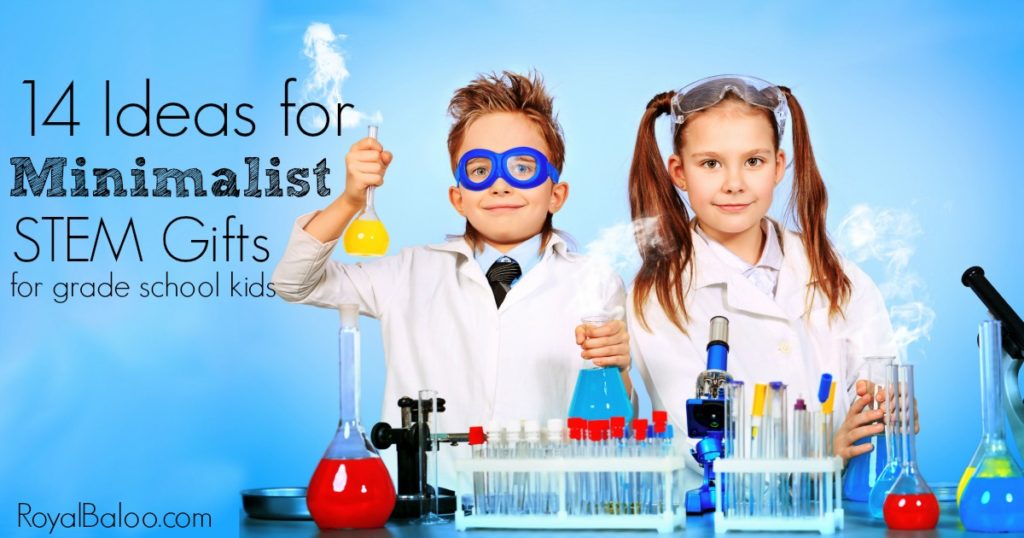 We made it through birthday season okay.  But the holidays are coming.  Handling one birthday at a time is no big deal but everyone getting presents all at once is completely different.

Our families are fully supportive of our minimalism, and many have adopted it for themselves.  So now they want to know, what do we do for presents?  This is not a unique problem.  In fact, I’ve seen many questions relating to this exact topic from other people trying to minimalize.  I’m not an expert but I wanted to share some ideas I came up with.

Specifically, I wanted to come up with some STEM (STEAM) related ideas because those tend to be cluttery in general.  We have a long history of keeping clutter in case we want to use it for an experiment one day.  Which means I had (yes, past tense, we purged it all!) an entire closet just full of clutter.

My first plan is disposable kits.  I’m talking about the kits you can get at stores like Michaels and Joanns (and other Hobby type stores) but also subscription based sets.  We get Tinker Crate and Kiwi Crate monthly.  They have everything you need for the entire project (aside from like water) and when you’re done – it all can go in the trash or recycling.  We rarely keep the finished product longer than a month.  It’s a lot of fun to work on, they play with them for a long time, and then they’re gone.

We often buy single kits too, though.  They’re an excellent way to emphasize a certain topic and the boys love them.  And I love them too because when we’re finished, the clutter is gone.

We’ve personally used the volcano and wizard sets.  They were both a lot of fun but also fairly educational.  Especially the volcano set – but anything by Magic School Bus tends to be amazing.  They actually have a whole line of kits.

Check out these related gift ideas for makers!

LEGO.  Okay, technically this is a thing and it’s not so minimalist.  Some people may disagree here, but I’m not out to have a major shortage of toys.  I’ve found that too many toys is a problem but not enough toys isn’t much fun either.  The right amount of the right toy is key.  I’ve spoken with a lot of people trying minimalism and LEGO often comes up.  They don’t want to get rid of them but they really are so clutter-ish.  The thing about minimalism is you have to make it work for you.  I have three blenders, which doesn’t sound minimalist.  But I use them all so that’s that.  That’s how it works for me.

My key to owning LEGO and not having a lot of clutter is to keep them relatively organized.  Of course, this also works differently for everyone.  My kids like them color coded so we do that.  There are about a million and one posts on Pinterest about organizing LEGO.

I think LEGO and LEGO sets are a great minimalist gift option because they’re just being added to an already existing place.  Plus, they amazing STEM toys.  You can build and create and do all kinds of things with LEGO bricks.

I love the 3 in 1 sets because they do tend to be a bit more versatile than many sets these days.  But they also have specific instructions to follow, if that is wanted.

We haven’t tried an Architecture set yet but it is on our list for things to buy for our geography course coming soon.

Check out these related fun math games for kids!

Growing up, I would never have said cooking was related to science.  But that’s exactly how my kids see it.  They don’t all love cooking, but the one that does (ahem, Royal) always wants to know why two ingredients come together to make something else.  He’s always wanting to try interesting and weird (to me) combinations.  Baloo doesn’t like cooking but he will help from time to time and it really cemented his understanding of fractions.

This is a bit of DIY work because I haven’t seen many cooking kits.  But this is simple, consumable, useful, and educational.  The idea is to pick out a recipe (or two or three) print it out and make a kit with all the ingredients (assuming they don’t need to be refrigerated).

I actually have a Pinterest board full of recipes for kids to make.  It was started this for Royal and we use it often.  I hope he becomes a chef so someone will cook me yummy food one day…


Widget not in any sidebars


I’m not recommending any physical cook books or kids cooking sets with this because that is clutter.  I don’t need an extra set of measuring cups for my kids.  My boring stainless steel set is just fine.  And we did a massive cook book purge because we get 95% of our recipes on Pinterest anyway.

Check out these related gifts for kids who love animals!

I hear this recommendation often and it’s been hit and miss with us.  With Baloo (10) it works much better because he can envision what he is getting.  For Logi-Bear (5), unless it’s something big that he was already excited about, it’s not going to be a great present to him.  Not that he doesn’t appreciate it, but it’s just not as exciting.  And half of giving a gift is getting someone excited (that’s my favorite part, at least).

So ideas for STEM experience gifts:

Science Museums
Other Museums (we have an Air and Space Museum, for instance)
Park passes (Nature is full of science waiting to be explored)
Field Trips (A lot of field trips can even be arranged for free, but you need to use your imagination.  We’re been able to see a lab at a local university, the back of a bowling alley, and have planned a trip on the science of food at a local grocery store)

There are so many places online where there is a wealth of STEM information but a lot of the best is on a membership or subscription website.  Here’s a few of my favorites:
YouTube Red (Bill Nye the Science Guy, Crash Course for Kids)
Netflix (more Bill Nye, Project MC2, and the Magic School Bus)
Mystery Science
The Happy Scientist (This guy actually hosts out co-op science class for kids 7-8 and his videos are great.  Short enough to keep their attention but packed with information.)
Amazon Prime Video
Science Channel Go

I hope that helps you find some gifts for the minimalist families in your life (or anyone who just doesn’t want more stuff).

Don’t miss the ultimate guide for gifts and school-age kids! 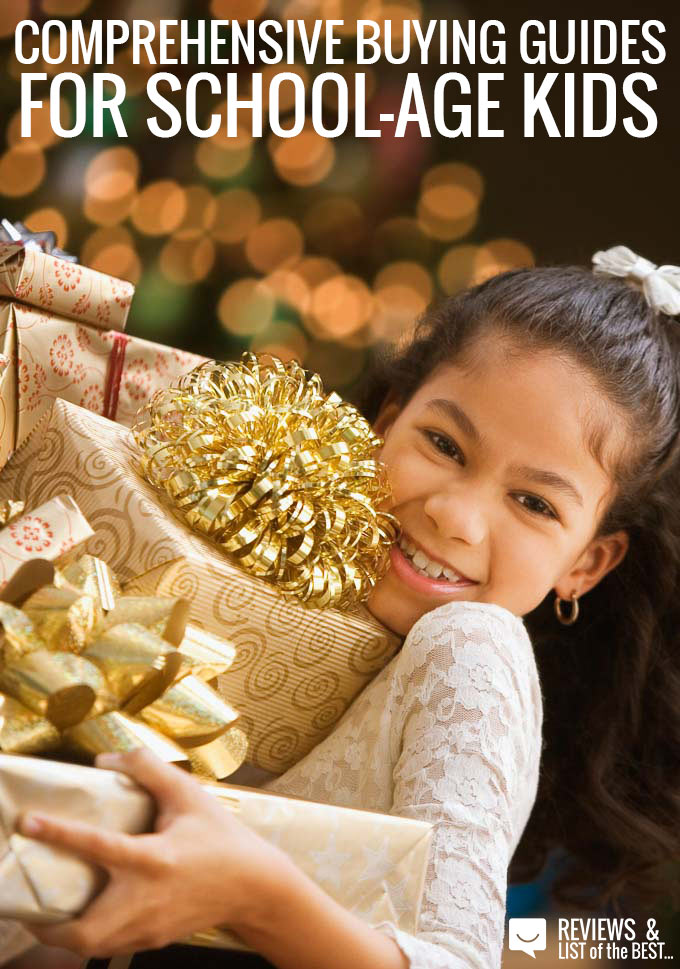 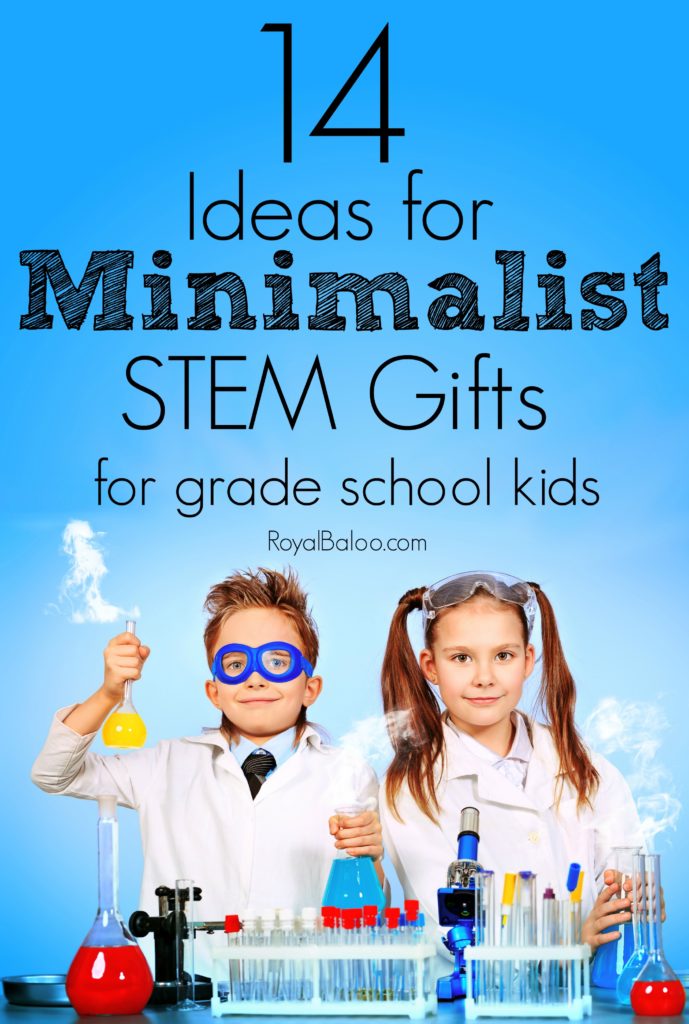 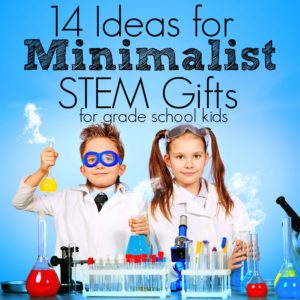