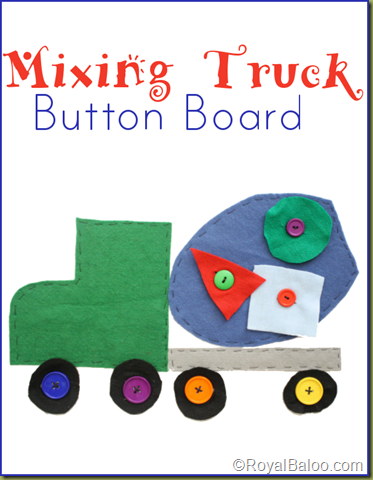 I’ve been wanting to do a button board, and when I ran across this Tree Button Board I knew I had to do something fun like that.  Since it’s for Royal I tried to think of something that would appeal to him, and immediately knew that it had to be a truck.  And what better type of truck than a mixing truck!  I already had the felt and canvas board on hand (both can be purchased at Walmart very inexpensively) and I bought a big bag of buttons in various sizes and colors at Walmart.  I simply cut out the shapes and sewed them on (although gluing with a hot glue gun works just as well and is perhaps a bit faster.)

Royal has been carrying it around for a few days but I finally managed to get it set up with all the felt pieces off the buttons.  He’s put them off an on a few times and really enjoys it.  Now he’s asking for me to put a picture of him in the drivers seat!

3 thoughts on “Mixing Truck Button Board”