Skip to content
Rhyming practice with a fun popsicle theme! Great theme for practicing rhyming this summer! Free printables for popsicle themed rhymes!
Rhyming is one of those things that you either get or you don’t.  There just is not an in between period where they kind of get rhyming.  I find repetition is key and one day it just clicks.  In the meantime, finding fun ways to practice rhyming is absolutely necessary.

We are already on day 4 of the Ice Cream Printable Bonanza!!  I’m cheating a little bit here and doing popsicles.  I just thought these double popsicles would be perfect for a rhyme matching game!! So popsicle rhymes it is! 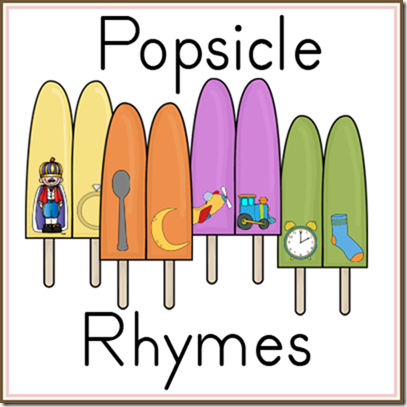 How to Use the Popsicle Rhymes

First, print all of the popsicles on regular paper (you can use cardstock or laminate them for more durability).  There are 12 different sets of rhymes, but for an early rhymer you could just print out one or two pages!

Cut them out on the solid lines.  Try to cut as close to the middle of the popsicles as possible!

Next mix up all of the popsicle halves and present them to your child.  Feel free to start off with just a handful of the rhymes at first so it’s not too overwhelming. 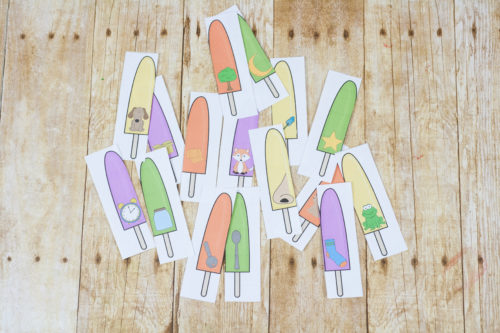 When first tackling those rhymes it can be helpful to over-enunciate the words.

Let them match the two printable halves together.  If the colors don’t match you’ll know for sure it isn’t a rhyme.  The colors repeat though so a matching color isn’t necessarily a rhyme either. 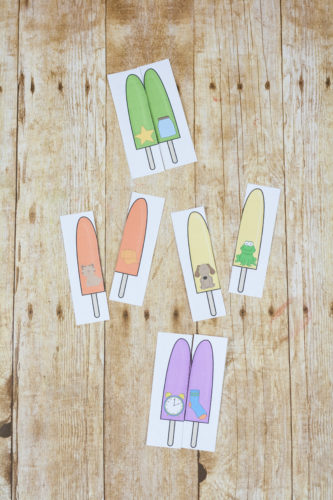