I have been working diligently on a literature-based, hands-on secular history curriculum. At its core are great books that we can enjoy as a family. It has taken me so much time to find these books and I want to make sure everyone can easily find great lists of books.

**If there is a book not on this list that you feel should be on this list, please e-mail me! erin (at) royalbaloo.com

My oldest is barely in middle school so we won’t include high school on these book lists.

Also, while these book lists will be mostly fiction, they will be fact-based. In other words, dinosaurs won’t be living with humans. While there may be some based on mythology (i.e. Gilgamesh) the idea is to get a realistic view of the time period from the eyes of a child at that time.

We will be reading and reviewing every single book on the list (or making a note as to why we didn’t finish a book). Only books that pass our tests will be included.

Also, all books will be secular. This does not mean there will be no mention of religion but any books that mention religion will be labeled as such. As a general rule, any books on these lists will not include overt messages of religion. 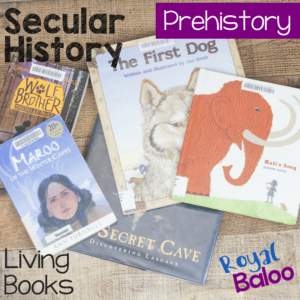 Kali’s Song is a story about a boy who is meant to be a mammoth hunter. Instead, he learns the value of nature and music. It’s a lovely story, very touching.

The First Dog by Jan Brett

The First Dog is an adorable story about a boy who is out hunting. He is making his way home when a wild dog keeps warning him of danger. He’s a little nervous but they end up becoming friends. The story covers a lot of different animals from ancient times and, in true Jan Brett fashion, has beautiful illustrations.

The Secret Cave of Lascaux by Emily Arnold McCully

The Secret Cave of Laxcaux is based on a true story of a group of teenagers in France who discover an old cave filled with ancient cave paintings. It was during the war so the boys were tasked with keeping the cave safe. Thanks to some very particular conditions, it is the best-preserved cave with paintings that we have.
Beautiful photos and sweet story.

In Stone Age Boy, a boy accidentally falls back through time and spends a few weeks with a prehistoric tribe. They gather food, hunt, make cave paintings, and learn a lot about the local culture. It’s a really cute book with good information and visuals.

Sunset on the Sabretooth (Magic Treehouse) by Mary Pope Osborne

This book is exactly what you expect from the Magic Treehouse series. It’s a short story that involves many aspects of prehistoric living and includes plenty of facts.

Your Mother Was a Neanderthal (Time Warp Trip) by Jon Scieszka

I was a bit hesitant about this book (due to the title) but I wanted to give it a chance anyway. And I actually think there is some good value to this book. I wouldn’t choose it for a read aloud, but as a book for them to read on their own. They do go into some science and history (i.e. they go back in time 40,000 years and dinosaurs went extinct 65 million years before that)

The story follows three boys (Joe, Fred, and Sam) as they travel back in time. They encounter cavemen and women, saber tooth tigers, woolly mammoths etc.

Maroo of the Winter Caves by Turnbull, Ann

Maroo is a young girl who lives with her family (father, mother, grandmother, uncle, younger brother, and younger sister). They are nomads in prehistoric times. The story follows the family through an entire summer period and the difficulties of being a nomad.

(Fair warning – Maroo’s dad dies. There are some tense parts of the book)

Quick note – we didn’t read all of this book. We decided to read Maroo instead. However, I am going to keep it around in case a child decides to read it on their own. Maroo seemed to cover more of life in prehistoric times whereas Wolf Brother is much more of a novel that happens to be set in prehistoric times. 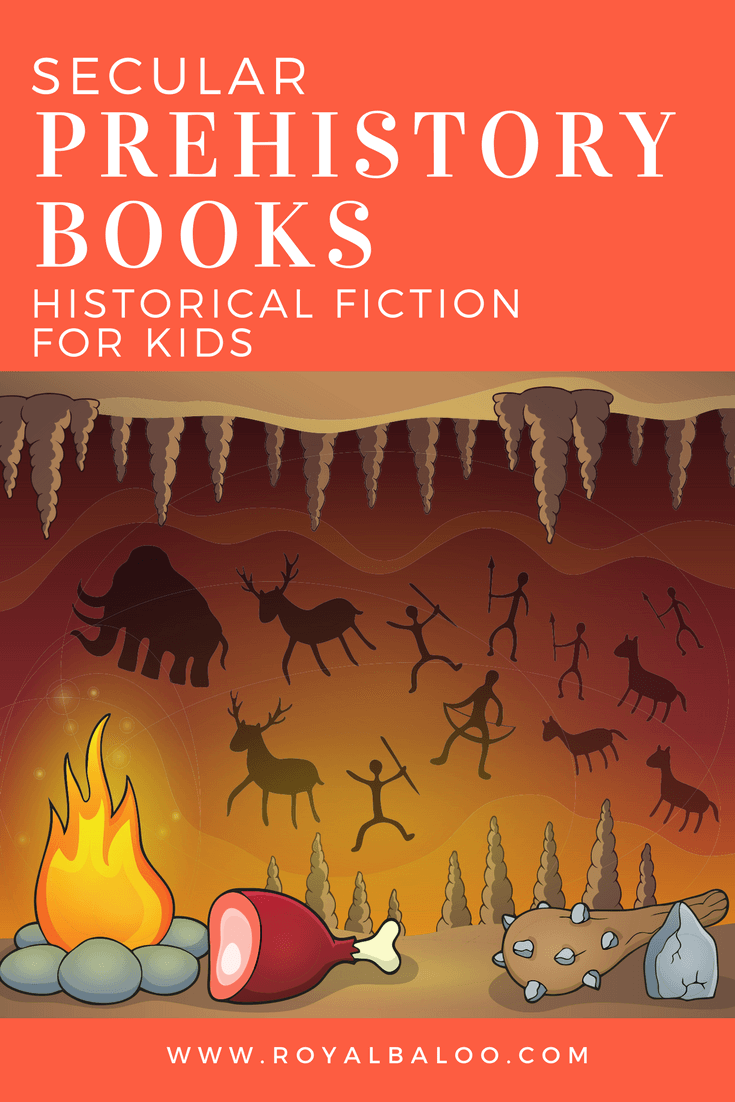