Secular science curriculum is one of the most sought-after items in the secular homeschool community. Finding quality resources that cover everything we want, in a manner that we understand, and in a style we desire is like searching for a rainbow unicorn. 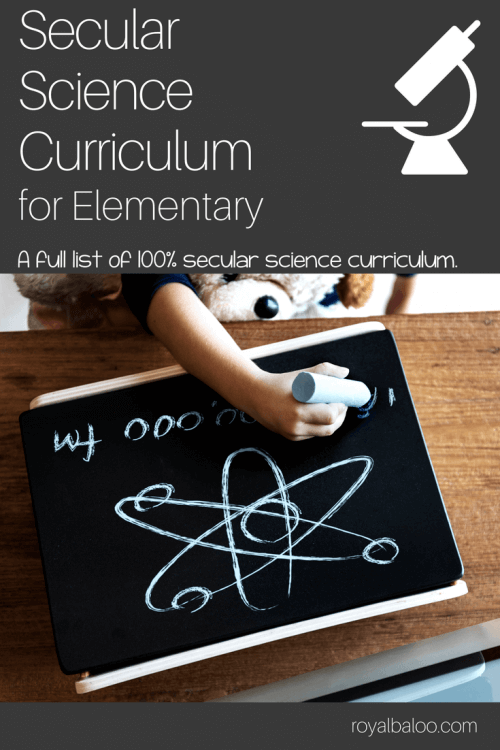 What makes a science curriculum secular?

It’s interesting to me that there is not one agreed upon definition of secular curriculum. So I want to make sure I cover the measures I am personally using so you know what kinds of links I will be sharing.

So I expect all the curriculum on this list to stick to the facts of science, not resort to creation stories or religious books for explanations, and teach subjects such as evolution and the big bang.

There is some curriculum that mentions no religion but refuses to cover evolution and the big bang. Those should be referred to as faith neutral – not secular.

Why is secular science curriculum important?

Science is based on facts, laws, and theories, not opinions. Scientific facts are verifiable through measurements or observations that are repeatable. Laws are our observations of what is true but do not explain why something is true. Scientific theories use laws and facts to describe and explain phenomena in the natural world.

All three work together and scientists continually use all three to prove and disprove ideas.

Secular science is important because it does not discount any facts, laws, or theories because of religion, feelings, or opinion. Secular science will not omit certain topics (such as evolution or the big bang).

But they are just theories…

One common argument against teaching evolution or the big bang is that they are just theories. But what people don’t realize is that scientific theories hold a lot of weight. These are ideas based off of facts and laws that have been tested and retested from multiple angles and answer many questions.

Gravity is also ‘just a theory’ but we don’t see many people trying to argue we shouldn’t teach gravity. The theory of gravity is supported by facts, has been tested repeatedly, and is currently the best-known model for what we see.

The germ theory is also just a theory yet you don’t often see people argue against washing hands because it’s just a theory.

How Do I Choose the Right Science Curriculum for Me?

Choosing curriculum is rarely easy. There are so many options and so many opinions on each that it’s hard to ferret through it all. Plus, you may want something very different in a science curriculum versus a literature curriculum.

For science, you need to decide what you want your science lessons to look like. Is it reading books, filling out worksheets, performing lots of experiments? Do you want a full year planned out or just need some unit studies?

Are you prepared to be hands on every day or do you need some days without a hands-on component?

When I first tried to choose a science curriculum I started by considered my kids personalities and needs. They enjoy science but really needed something that would pique their interest even more. That definitely meant a lot of hands-on experiments, especially ones that tend to be more open-ended.

I also knew I wanted something on the classical cycle that would rotate through different subjects. I feel like we learn everything more in-depth this way.

So think about what you want in a science curriculum and then peruse the following options!

The list may be short, but these are all great options for elementary science!

Real Science Odyssey is a classical approach to science where you will focus on one subject per year (example biology, earth and space, chemistry, physics).
We’ve used RSO for a few years and it’s the program that has best resonated with our needs. It’s well planned out with just the right amount of information and experiments.
Review from Home SchoolRoom
Review from Creekside Learning

Be Naturally Curious isn’t exactly a full curriculum but a series of unit studies. They have enough unit studies to cover a lot of sciencing though.
We’ve used multiple units from BNC for different topics but haven’t used it as our full curriculum. I think it’s worth adding though because the units are chock full and have plenty of information.
Review at Secular Academic Homeschoolers
Review at Disguised as a Supermom

Blossom and Root appears to be more of a full curriculum but you can buy some of their science separately (nature study for Kindergarten and soon science for 1st grade). It’s a nature-centric curriculum.

I am hesitatingly adding the last two. Technically they are neutral science, not secular science. This means they do not include evolution or the big bang. However, I am making this exception because this company does include evolution in their materials for middle school and high school.
But I feel it is important to note that they will not cover any evolution in the elementary years.
I also fully disagree with their definition of scientific theories and scientific facts and it makes me nervous to test out the curriculum on the whole.

I’ll continue adding any new science curriculum I find that meets the standards of secular science. If you have any that you’d like me to consider, please send me a quick e-mail erin at royalbaloo dot com!