This is the first month of the Poppins Book Nook blog hop and the theme this month was Knights, Princesses, and Castles. 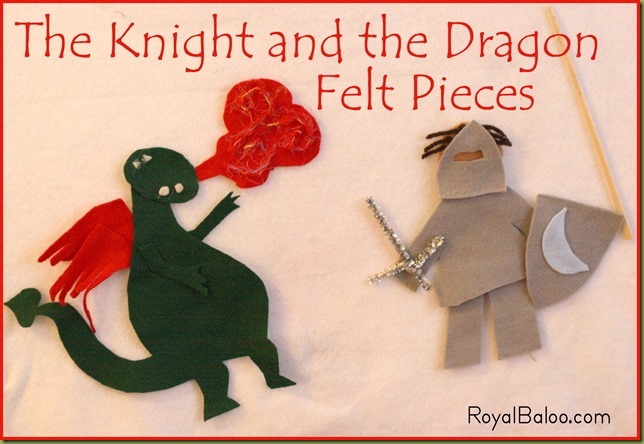 We are conveniently in the midst Medieval week, so we have a bunch of medieval books out from the library.

We first read The Knight and the Dragon when we were reading Tomie de Paola books.  This was one of the boys favorites, and we’ve read it often ever since!  It’s such a cute story about a knight and a dragon who decide to fight.  They both prepare but when the day of the first comes, neither of them are really ready.  Then end up working together and find a different and much nicer solution.

We’ve just recently turned one side of our easel into a felt board.  It was broken and useless, so reusing it was a no-brainer!!  For our first felt board set, we decided to do The Knight and the Dragon.

First, I made the dragon out of dark green material.  I simply cut out the general shape of the body and then added his head, arms, and wings with a hot glue gun.  The fire is not attached.  I added some swirly bits of yarn to the fire to make it a bit more 3D.

The knight was a bit more complex.  I wanted to be able to act out the story so I needed him in his knight gear, and out of it.  I cut out the shirt, legs, arms, neck, and head and used the hot glue gun.  Then I took brown yarn for his hair.  I laid the knight on the gray felt and traced him to get the armor.  Then I cut out a helmet and shield.
The jousting stick is a wooden chopstick.  I added a velcro dot so it would stick.
The sword is a sparkly pipe cleaner that I shaped into a sword and added a velcro dot so it would stick to the board.

All dressed up and ready to go!

Then we sat down, and started acting out the story.  The boys loved being able to manipulate the materials while I read!  Royal and Baloo both picked a character and were in charge of that character throughout the story.

If you have a craft/activity/post on castles, princesses, or knights, please link up below!

9 thoughts on “The Knight and the Dragon–Poppins Book Nook”