I like to jokingly call this the experiment that never ends.  Baloo caught me on Pinterest, and this pin caught his eye:
Walking Water
He immediately begged me to do it, and it looked so simple that I thought we’d give it a try!  He wanted to do purple, and we used toilet paper (because we were out of paper towels)

Immediately we decided to see if there was a difference between cutting the paper towels in half widthwise, or using the full width.  Royal chose blue and got the half width TP.

I was surprised when the water travelled up the TP at the same rate.  And we also found it interesting that the purple dye separated into blue and red.

The red and blue separation led us to a discussion on color mixing.  I decided that we had to try the experiment again with two colors going into one cup.  We chose blue and yellow. 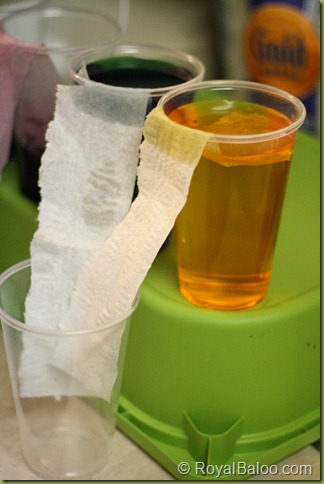 To our delight, the colors combined quickly to make green!  The boys were thrilled!

This is about when I discovered that paper towels work MUCH MUCH better than TP.  The TP was so slow that the boys lost interest.  But when we tried with paper towels (we had to go buy them) it went much faster.  Then we noticed that yellow seemed to move through the paper towel much faster than the blue.  This discovery led to the last part of our experiment… 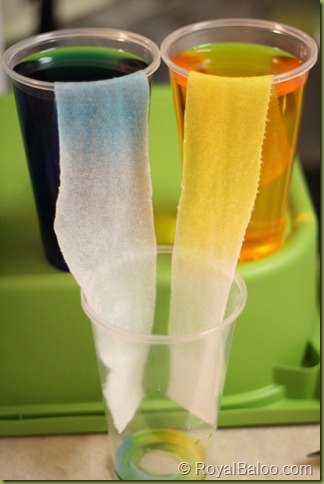 The green showed up so easily! 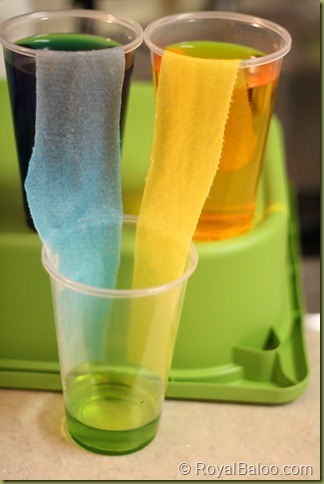 The final part of our experiment: Would hot water or cold water move through the paper towel quicker?  We chose red and filled up two cups with equal amounts of hot and cold water.

It’s hard to tell in this picture, but the hot water moved much quicker. 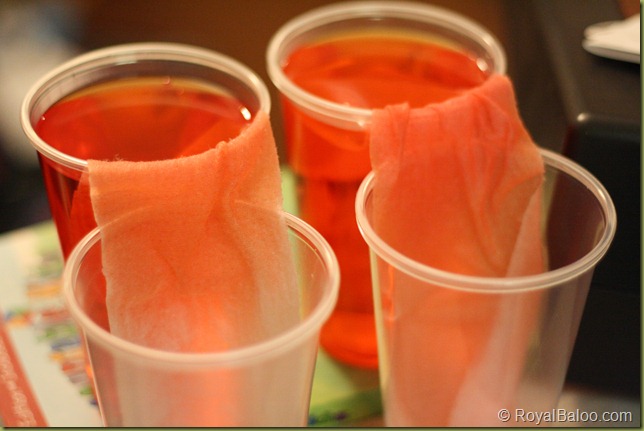 The dye and the water came through faster with the hot water!

We had a few mishaps along the way.  With the blue on the far left I accidentally tore the toilet paper.  I replaced it with paper towel, which worked much faster.  The purple still has the toilet paper in it, thought you can see how much slower it’s going!  At this point the purple had been going for well over an hour, whereas the green had been going for about 15 minutes. 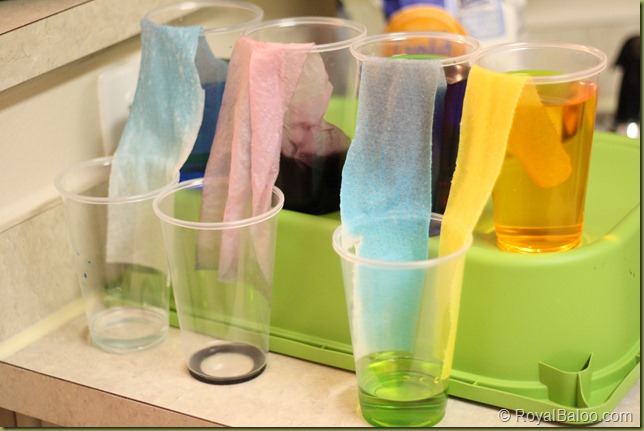 *TIPS*
If you’re going to try this experiment, I have a few tips for you.
First, fill the water to the top of the cup.  Our cups that were half full took much much longer to produce water in the lower cup.  Of course, that led to a fun discussion about gravity, which was an interesting part of our experiment.  But if you don’t want to test gravity, fill up those cups!
Second, do NOT use toilet paper!!  It is slow slow slow!!  And it breaks very easily.
Third, definitely make sure to have something to elevate the first cups on.  It just makes the process simpler.
Fourth, if you’re doing this with young ones, heat up the water a bit first.  For our hot/cold test I just heated up a mug of water for 1 minute in the microwave.  It was warm to the touch, but not enough to burn.  And it made a big difference in time!

11 thoughts on “The ‘Walking’ Water Experiment”