With the big eclipse coming up in a few months, we decided it was time to delve into a bit of astronomy.  Truth is, my kids have always been interested in space.  I think most kids have at one point or another.  I mean, it’s huge and mysterious.  Plus, aliens. 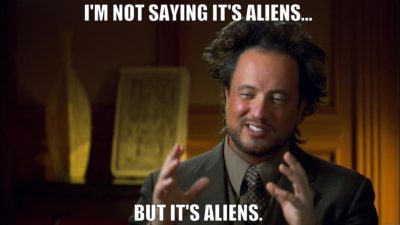 We decided to start close to home though – the moon.  It’s my favorite part of space to study because we can easily see it.  Often.  We started with 4 simple experiments to understand a bit more about the moon. 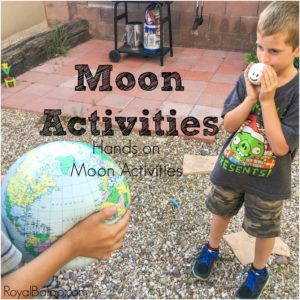 Earth Size versus the Moon Size

It wash hard to decide where to start, but comparing sizes is always interesting.  Although, I think the distances between the planets, sun, moon, etc is all much more impressive than the size difference between them.

The earth is roughly 4 times larger than the moon (it’s really more like 3.7, but I was trying to keep it simple enough).  We used LEGO to start our comparisons.  The moon took 7 of the 2×2 DUPLO LEGO and then we used 4 times as much for the earth (28 DUPLO). 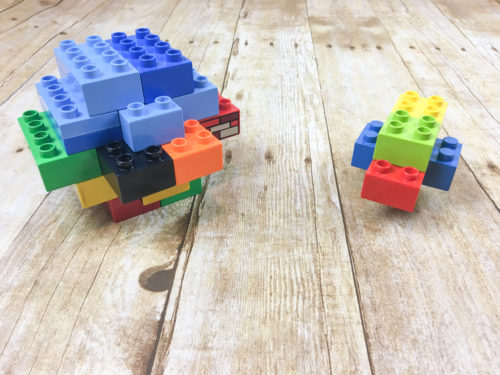 We also discovered a baseball and our inflatable earth are pretty close to a 1:4 ratio. 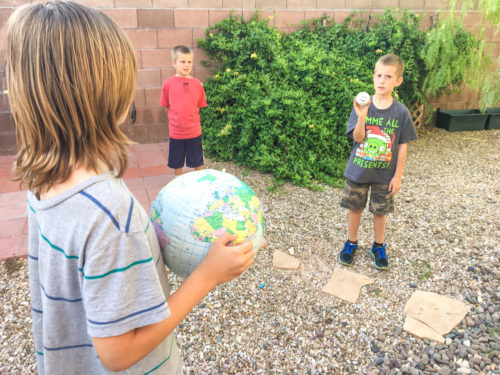 Our first task was to identify the difference between rotations and revolutions and how those apply to the earth, the moon, and the sun.  We used the baseball and inflatable earth for the rest of the experiments.  (Try the Dollar Tree for inflatable globes.  They had them last time I was there!).

First, Baloo rotated the earth.  We had a brief discussion of how one earth rotation is equal to a day. 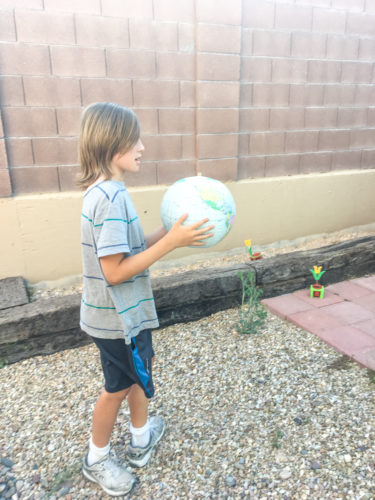 Next Royal demonstrated a revolution of the moon around the earth.  (Our sun was not being very cooperative so we didn’t revolve around him).  I told him to make sure to keep the smiley face (man on the moon) towards the earth at all times. 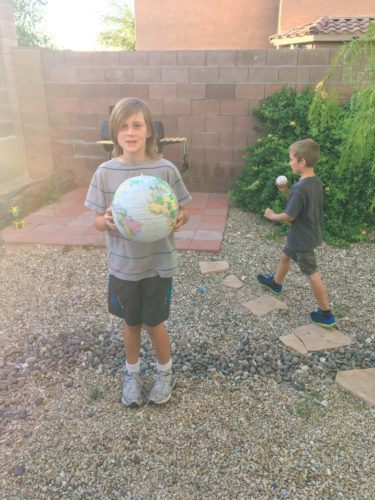 Can you see the happy face?  Always toward the earth.  Why?  Because one side of the moon is always facing the earth and the other side facing away. 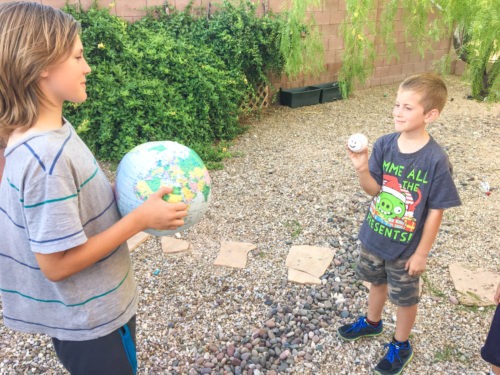 I had to break it to Logi-Bear that the moon doesn’t actually shine – it isn’t luminous at all.  I think he already knew that.  The information they pick up is amazing.

They were not surprised that the moon is not luminous and that it only reflects light.  And it actually only reflects a very small portion of light (the amount of reflection is dependent on multiple factors).  We called it the ‘apparent brightness’ to try to be as technical as possible.

What we did learn was that just because we cannot see the moon doesn’t mean that the moon isn’t lit at all.  In fact, there is not a ‘dark side’ of the moon.  With Logi-Bear as our sun, we saw how the sun could be shining on the moon in a way that the earth wouldn’t see it.  The dark side of the moon wouldn’t be so dark right then.  We just don’t see it from earth. 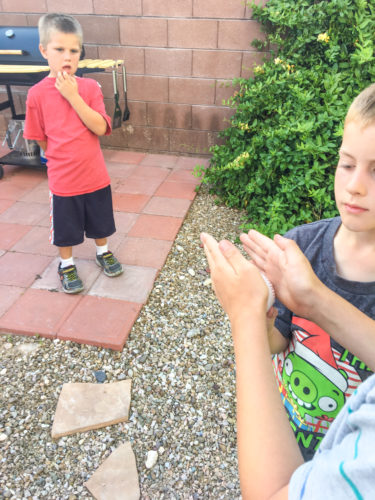 Moon’s Affect on the Earth

We don’t often think of the moon as much more than a really pretty object in our sky, but in fact the moon acts on the earth in multiple ways.  One clear way is the tide.

I had my moon and earth stand close to each other and we discussed gravity.  The moon has a LOT less gravity than the earth, but it’s gravity still has an effect on the earth.  The moon’s gravity is responsible for our tides.

I had Baloo squeeze the globe to show the moon pulling the earth to it. 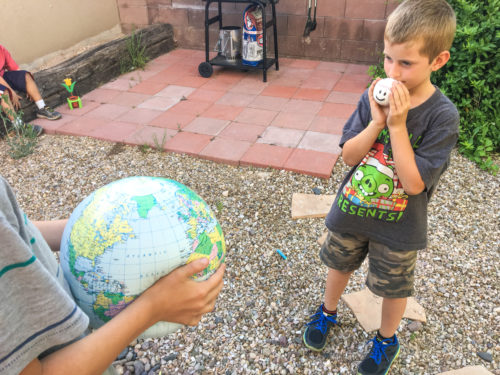 Then I had Royal start a revolution and Baloo moved his hands to illustrate that the tides change as the moon moves.  Hence why the tides ‘come in’ and ‘go out’. 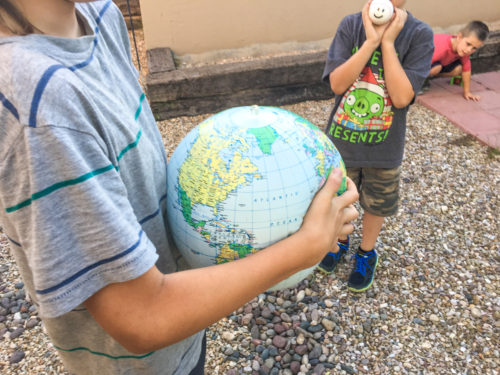 We will be chronicling all of our space activities as we explore the planets, black holes, and who knows what else.  Make sure to check back!  In the meantime, don’t miss all the other great activities in this giant Space Unit study! 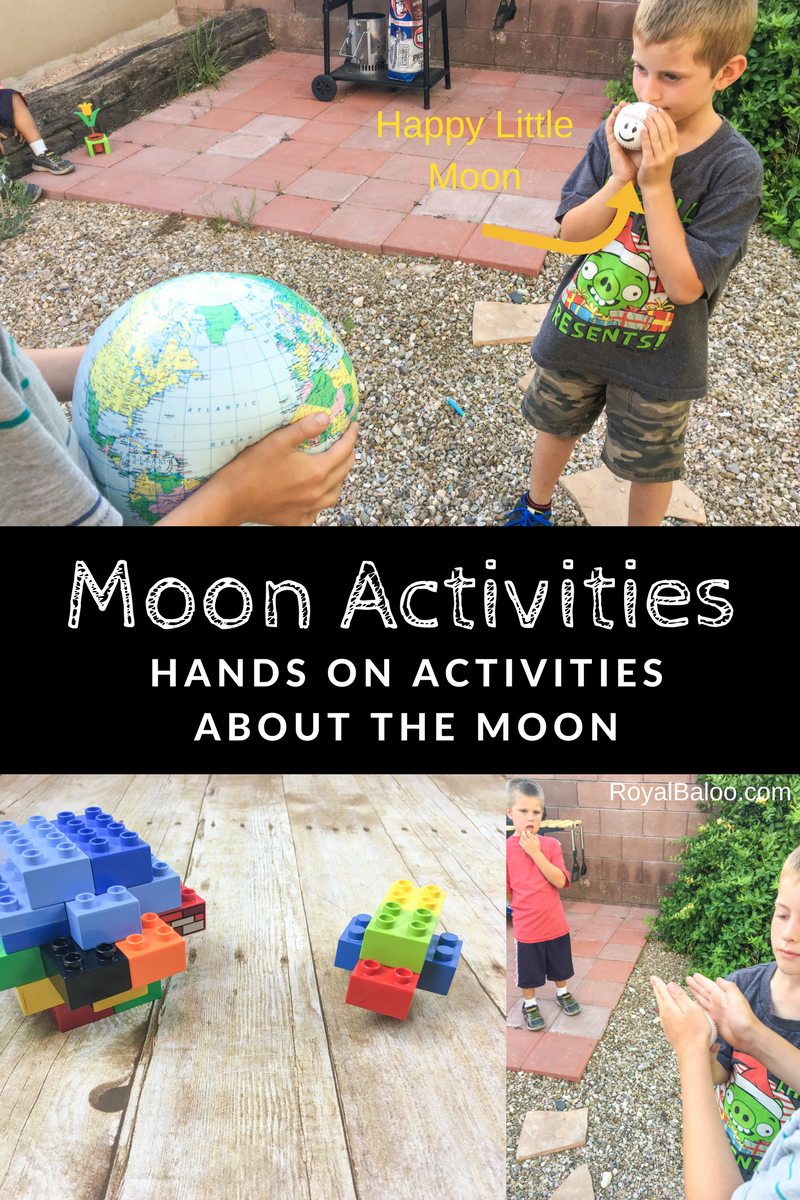