So Baloo recently started fractions, among other mathematical concepts.  It seems like there’s just been an explosion of new concepts lately.  Anyway, I immediately noticed there is a severe lack of colorful and fun fraction practice.  You can only cut a pizza into so many fractions!  So naturally I had to put something together.

Some of the pages have two versions: one for beginners and one a little more advanced

Fraction Graphing:
We used dot markers and Baloo decided to cover the entire area with red.

Spin and Color.
First, use a paperclip and pencil for a spinner.

Then color in what you’ve spun until they’re all filled up!

This one is really straight forward.  Just color what it says to color!

Fraction Connect Four:
This might be one of my favorite additions.  First I had Baloo play by himself.  He was focusing not only on the fractions but the strategy of what spot would help him most.

Four in a row!

Royal wanted to play so I let him give Baloo some competition.  They had different colored dogs and took turns rolling. 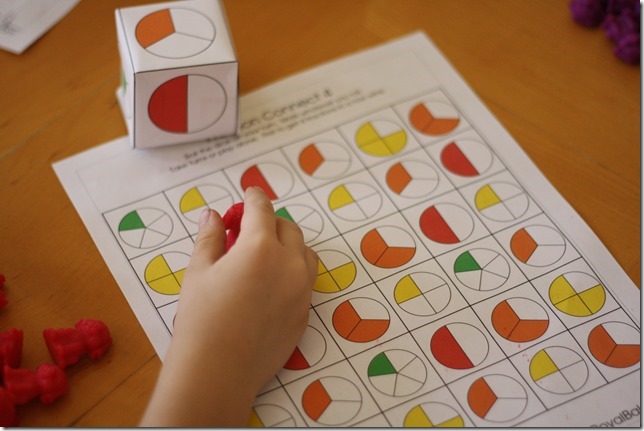 The biggest problem we had was when they blocked each others four in a row possibilities.  Both were very upset.  We made a new rule that you have to choose the best spot for you, not the one that blocks your opponent.

Four in a row for Royal!!