We’ve started working more on beginning letter sounds and I’m doing my best to make it active and fun.  Logi-Bear is not big on sitting and learning.  So getting up and moving and playing games is the goal!

The idea behind this ABC Scavenger hunt is that the letters on the hearts were the beginning sound of the object.  We did W on Window, D on door, B on bed, S on sink, C on couch, O on oven, L on Lamp, V on Vacuum, and T on TV.

Of course, initially he just walked around and found the hearts.  But I encouraged him to say “S is for ssssssink”.  Then when he would get stuck I’d say “hmmm, what starts with /b/?” and we would brainstorm words that started with /b/.  Eventually we’d get to ‘bed’ and go look at the bed!

Before we started I put all the lowercase letter hearts on the table.  As we found the uppercase hearts we would go back and match them.  This also helped me to make sure we got all the hearts!

Finally, I had this scavenger hunt worksheet printed out.  We drew a picture of each item we found a heart on!

Also Included are printable hearts with letters!  You can print in black and white on colored paper so save on ink costs 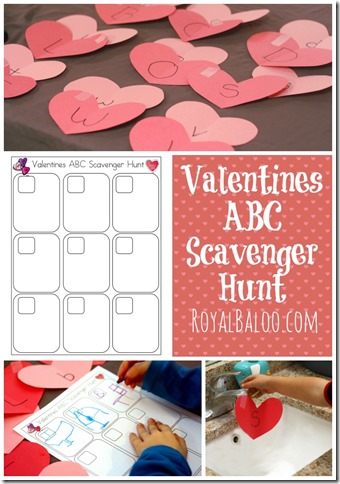