I don’t usually let my blog be the inspiration for activities I do with the boys, rather the activities inspire the blog.  However, I’m doing the ABC’s of Sensory Bins next week and I was STUCK on X when the idea of an X-ray sensory bin hit me.  I thought it sounded like a lot of fun, so we went for it!

I wanted to keep the colors black and white so I used black eyed peas as my base.  Then I cut up some black construction paper and tried to crimp it.  I would have put the construction paper through a shredder, as that would have been so easy, but I don’t have a shredder!
At Dollar Tree I found some glow in the dark skeleton pieces that I knew would be perfect!  They’re dinosaur skeletons, but bones are bones!
I also included some glow sticks and the cardboard tubes that the sticks come in.
All good sensory tubs should include spoons or cups, so I found a bright orange spoon that almost glowed.  Tongs and a metal spatula were thrown in as well. 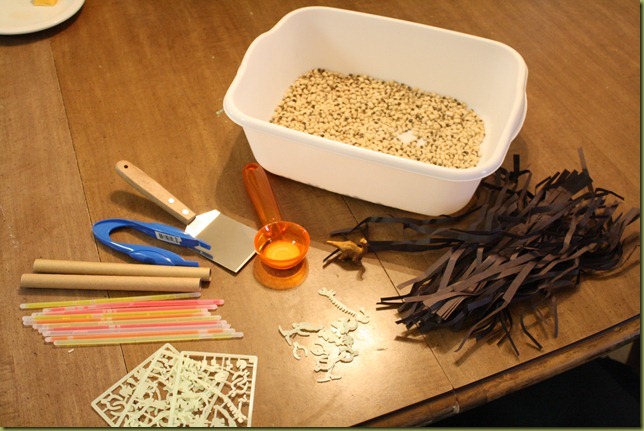 I set the boys up in a dark room and snapped all the glow sticks before presenting them with the bin.

Royal immediately made a grab for the glow sticks and Baloo went for the glowing bones.  No fighting?  Not this time…

Baloo used the tongs to pick out all the little bones.

And then he carefully set them on the metal spatula!

This bin has been one of our best bins yet!  They boys loved playing with it and amazingly didn’t fight over anything.  I just wish the glow sticks would re-glow…but at $1 a for a pack of 5, I think we can remake this again!