When I put up the Name color-by-number post a few months ago I had no idea it would get such a response!  I’ve been overwhelmed, honestly.  And as hard as I’ve tried to keep up with the requests, I am falling quite behind.

So, I’m putting up a little tutorial for anyone that feels up to making their own instead of waiting on me to get it done!

I make mine in Open Office Draw, but I believe Microsoft Office has a similar application that should open this file just fine.

I have the pages separated by the number of letters in the name.  Select the numbers and type in the name instead.
Next you’ll need to rearrange the numbers so they are within each letter. 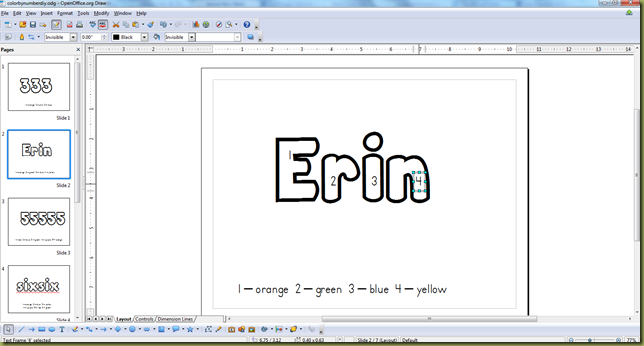 Then you’re done!  You can change the colors if you’d like and make sure everything is centered as you want it!