We are still in recovery mode here but somehow we still managed to have a fun week!!  We were concentrating on the letter C, the color yellow, and cats.  Here was Royal’s set-up this week:

He is starting to understand that the letters are the ABCs.  He can usually point out B so I’m hoping he will start to pick up on the other letters as we move through the alphabet. 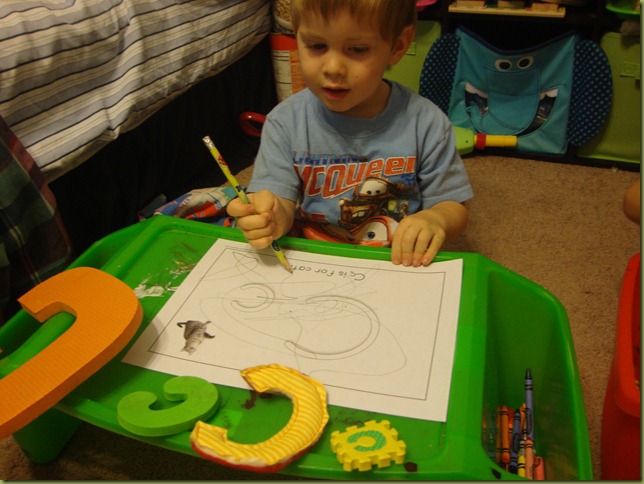 I suggested that he dot all the Cs and he was quite happy to do so!

And he even traced some lines!

He really enjoys the dot paints!

We talked about the different pets that people own.  Later in the week we put them in a pocket chart and I would ask him to point out a certain animal, or ask him what the animal says.  He loves making animal sounds.

In honor of our cat theme and kid-friendly recipe, we made cat cookies this week!  I let the boys decorate their own cookies.  They had a blast and loved the cookies!

We were at Ross this week and I spotted this Melissa and Doug puzzle featuring pets.  I couldn’t pass it up!  All 3 boys love the puzzle!

Royal’s big thing this week was dressing up.  He was a mouse…

A dog (many many times!)

And a soldier!  He insisted on wearing this to the fair.

Other fun things we did this week…

Royal said he was making a birthday cake with the pegs…

And of course he blew out the candles!

The weather here has cooled off quite nicely!  We have spent a lot of time outdoors.  Royal is getting so confident on his Boot Scoot Bike!  He was almost running on it by the end of the week!  He wasn’t yelling here, he was just telling me he needed to get gas.

One of the games at the fair…seriously.  I’m really not sure who thought up the game of throwing toilet paper into a potty…

That’s all for us this week!!  We didn’t quite finish with our cat theme so we’re just going to continue it this week!  No sense in rushing through it!

We will be linking up to: