Baloo was sick a few weeks ago and we had bought him some Gatorade in those need bottles with the squeeze top.  Those are a treat in our house!  I saved the bottles because I knew we could use them for something fun!

I set up 2 hula hoops around 5 feet apart and told Royal and Baloo to choose one to stand in.  Then I gave them the Gatorade bottles full of water and told them to try to shoot their water into the other person’s hula hoop!

One rule was that they had to keep both feet inside the hula hoop.  I caught someone cheating!

I probably could have moved the hoops closer to each other.  It was a bit too far for Royal.  He certainly tried though!

Royal didn’t really get into the groove of it until Baloo had already emptied his bottle and run off to refill.  So I may or may not have helped Royal sneak up on Baloo and dump his whole bottle on him!

Guess it was bad timing because Baloo had a FULL water bottle right there.  Oops!  Well, at least they were cooling off on a hot day! 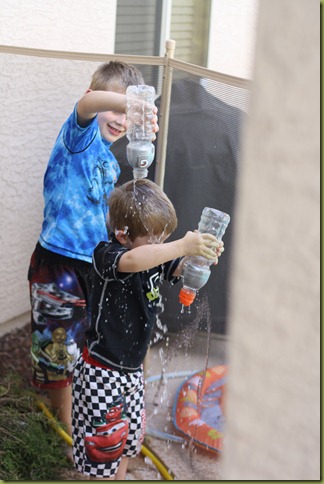 This was a great and simple way to cool off on a hot afternoon!  And it got the boys out running around!