How do you get your kids interested and invested in reading?

I’ve mentioned it a million times now, but again, Logi-Bear is so close to reading.  He wants to read and happily works with me, but I feel like he still needs a bit more work with letter sounds before he’s truly ready.  But I know when he is ready, there are a few ways to get him interested in our reading materials.  And the easiest one I have at my disposal?  Dinosaurs.  I swear, you put a dinosaur on something and he’s on it.  So Dinosaur CVC Words seemed to be a logical next step.  And now they’re ready whenever he is ready! 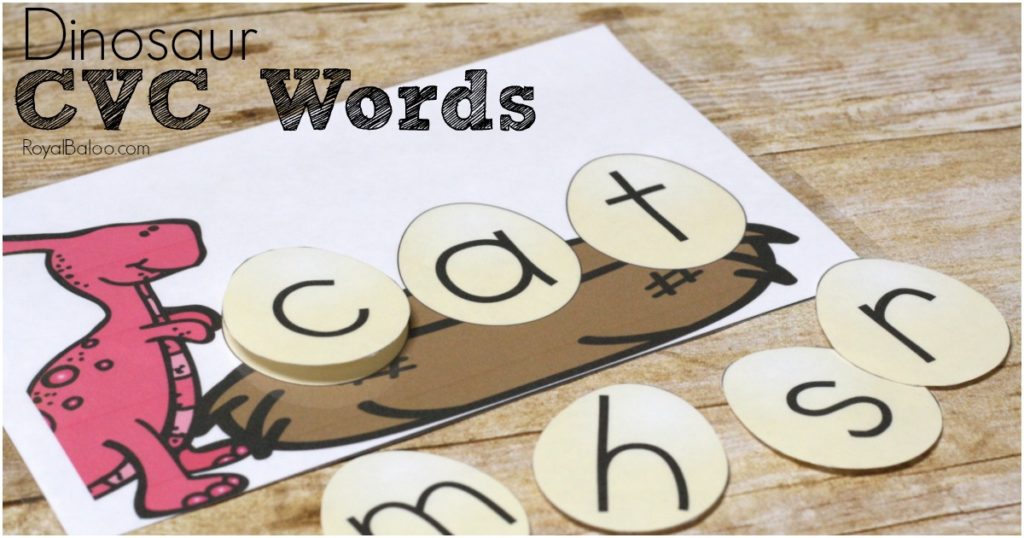 Cassie from 3Dinosaurs.com and I are working on this 31 Days of Printables challenge together and it is awesome.  It’s really been an interesting exercise, that’s for sure. 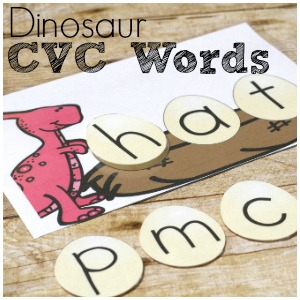 How to Set up the Dinosaur CVC Word Mats

I laminated mine so they would last longer.  The eggs needed to be laminated more than the mats, but I did both.  Which actually ended up working out well because I added the Hook and Loop dots as an after though (Hook and Loop is the generic name for Velcro, but mine aren’t actually Velcro brand, ha!)

I added a dot to each egg so they wouldn’t slide as much.  The last thing I want is for Logi-Bear to be frustrated because the eggs are sliding.

Each mat has it’s own eggs.  I don’t figure that we will use at the mats at once so I wanted to be able to print out just the eggs I need. 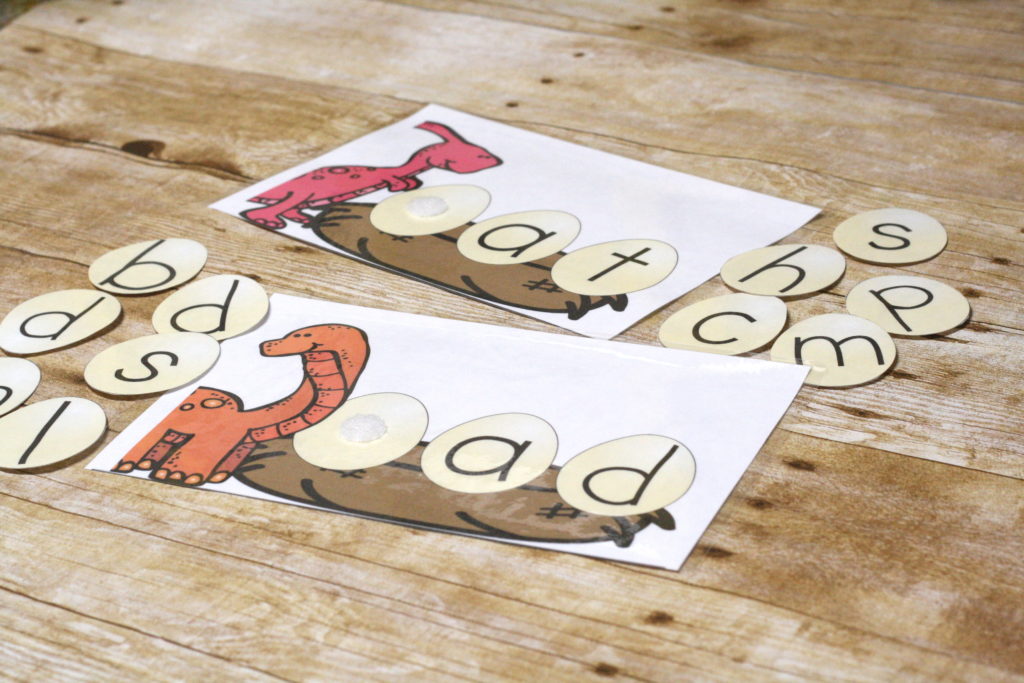 How to Use the Dinosaur CVC Word Mats

My intention for our first use is to sound out the words with rhyming skills.  Logi-Bear is good at rhyming so that should help ease into the sounding out of words.  I’ll tell him “this is the -at word family.  All the words end with -at.”.  Then we will add the first sound and sound out the entire word. 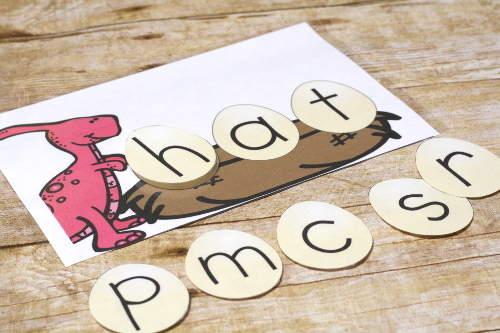 My hope is that when we just switch out that first letter, it’ll be easy to just replace that first sound.  I really want him to see the patterns with CVC words because that makes the beginning of learning to read so much easier. 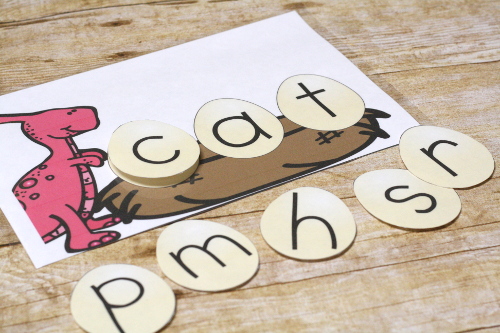 My second intention is to play ‘Change the Word’.  This is a game we play in All About Reading where they read one word, one or two letters are changed, and they read the word again.  Very simple but effective when working on patterns and reading quickly.

As it turns out, the d and p look very similar.  But the eggs fits best one way. 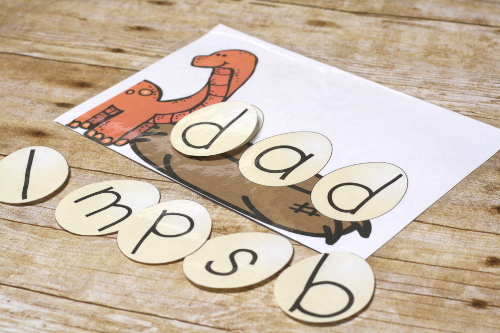 Have you heard that there is a newsletter that only updates once a week (on Fridays) with links to all of the printables Cassie and I have put out for this challenge?  Indeed, there is.  Even better, this week an extra goody will be included in the mix!  This Dinosaur ABC Order printable will be there.  Truth be told, I “accidentally” made 8…or 9…dinosaur printables.  So the extra goes to you guys! 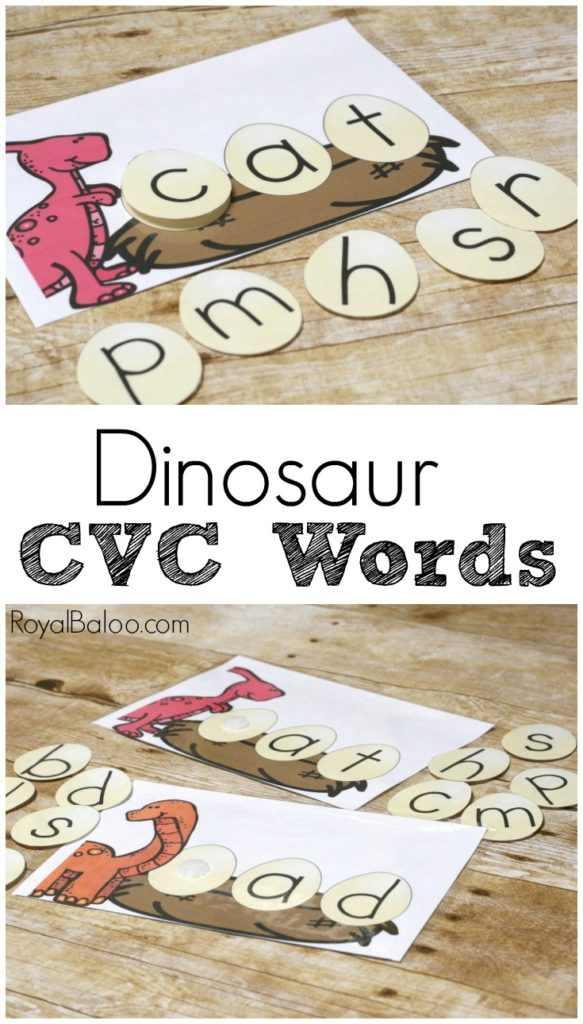