A few months ago I was lucky enough to score this used copy of Before Five in a Row for $3.  There are notes in it, and it was definitely loved – but that just makes it better!

Anyway, we’ve just now had a chance to really start rowing some of these books.  I love BFIAR!  I was really nervous to buy it based on the reviews saying that some of the activities were obvious or there wasn’t enough, but I have found plenty of value in this book.  Definitely enough to pay full price!

The first book we’ve rowed from BFIAR is The Snowy Day by Ezra Jack Keats.

I wanted this art session to be pretty opened ended, so I presented it like this:

I left the tissue paper, already torn, glue, Q-Tips (for the glue), and white paper on the table and told the boys we were going to do some art similar to the method done by the illustrator of The Snowy Day.  I didn’t give them any instruction, but just let them go at it!

I love that despite being given the same materials and same instructions, they went about this is completely different ways!
We tried to add some water to Baloo’s to see the affect the bleeding paper would have…but the paper didn’t bleed!  Not even a bit!  I guess tissue paper makers have found a non-bleeding method of coloring tissue paper.

We did a fun little snowflake craft that involved some fine motor skills!  I stumbled  upon this little flower/snowflake punch and knew we had to use it.  I set it on the table with some white paper and let the boys go at it.  Both Royal and Baloo had to fiddle with it a bit to figure out how to work it, but they both did end up getting it!!

I let them play with the punch for a long time and then collected all of their “snowflakes”.  We had a huge pile!  Then I gave them some blue paper and some glue and let them make their snow scenes!

Royal wanted to make a R so I wrote an R in glue for him and he filled it in with snowflakes!

No FIAR book would be complete with a bit of food.  We decided on Snowman Pizzas (as seen on Pinterest, from Delia Creates!).  I decided to make them individual sized so the boys could each have their own.

There is NO chance that my kids would eat black olives, but most of them love blueberries, so I decided to use blueberries for eyes and buttons!  The boys were pretty excited, although our pizzas weren’t as delicious as they look.  We will have to try again another time!

We had the opportunity to drive up a nearby mountain, and there happened to be snow up there!  After a bit of sledding and playing in the snow, we stopped to look at the footprints.  There were plenty of prints from us, but we also saw some animal prints (dog prints in this picture!)

We also used our Arctic Sensory Bin to make tracks just like the little boy in the story!  We were able to notice that even the little plastic animals made distinct tracks!

And lastly we used my Snowman Pack, the Winter Pack from 3 Dinosaurs, and The Snowy Day pritnables from Homeschool Creations. 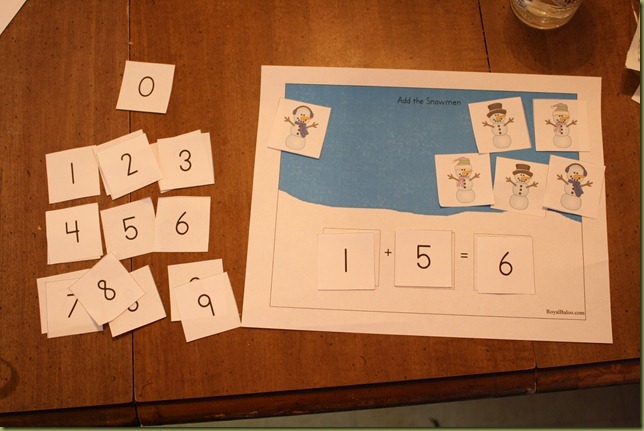 We really enjoyed The Snowy Day, but the boys favorite part of all was getting to play in real snow!  We don’t often get snow living in the south, so it’s been a real treat for them!

Our first BFIAR book was a hit!  I can’t wait to row more of them!