So Baloo loves Minecraft.  We found out about a website called Minecraft Homeschool, and they have a lite program for kids 5-15 all about the 7 Ancient Wonders of the World.  I didn’t even hesitate – we signed him right up.  It was 2 weeks before the class started though, so I wanted to give us a project in the meantime.  And we decided on Minecraft Creeper Paper Mache. 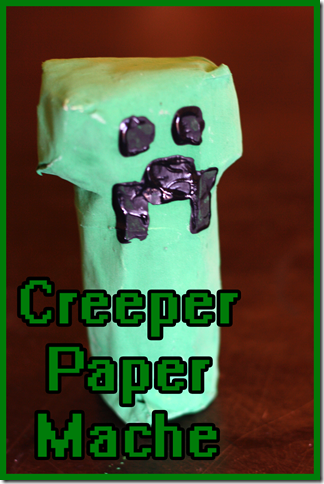 I used a flour/water mix for the paper mache as found at UltimatePaperMache.com.  We used a toilet paper roll to make the shape and then paper-mached it.  I made sure to let it sit out and dry really really well since we used the flour method.

After it dried, Baloo started painting.  It took 3 coats to get a good green color.

We wanted to get nice square eyes, so I cut a piece of thick black foam into a square and hot glued it onto a dowel (The square dowel rods were provided free by the website Craftprojectideas.com)

Then we made the creeper pattern on the face!

Isn’t this little guy kind of creepy?  We made him a little friend too…fortunately these ones don’t explode.

They’ve been kind of helpful too.  Baloo chose to read to his creepers… 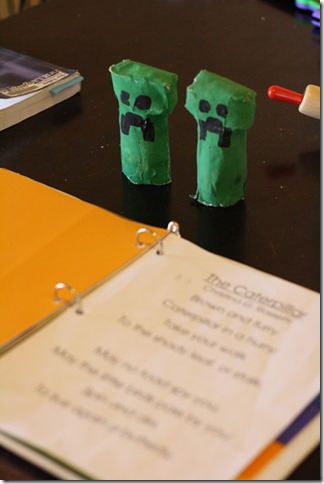 Surprisingly, they haven’t stood up to the destruction of 3 boys.  When dried, they felt hard as a rock!  Bits and pieces are coming off though

I do think the boys are playing with the pretty hard.