This was our first week of doing our own “curriculum” theme -  working with materials that I mostly made myself.  I was pretty excited to begin the week, and now that we’re done with the first week I definitely know what not to do.  Having said that, I think our week still went pretty well!

I do intend on offering all of our resources as downloads, I just didn’t have an opportunity to get them all formatted properly this week.  However, I will have everything up for download as soon as possible! 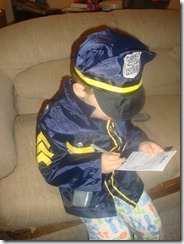 I was feeling really enthusiastic at the beginning of the week and wanted to go all out.  So we went and got a police officer dress-up outfit from Kids R Us.  This is not something that will happen often, but I couldn’t help myself!!  As an added bonus, Baloo has spent the week dressing up as a police officer, arresting Daddy, writing tickets to mommy, and blowing his whistle.  Daddy even had a short stay in jail! 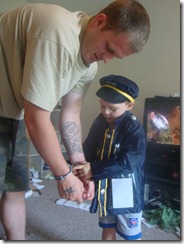 Onto real school work!!  I made a few writing practice worksheets – car, officer, siren, and one for Baloo’s name.  As it turns out, I think we need to practice writing letters individually without the helper lines before we move onto writing whole words. 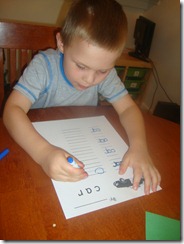 We made a Cops vs. Robbers game that practices counting by 10s.  Here is Baloo counting the die.  He was actually not into this game at all, but did have a pretty good grasp of counting by 10s by the time we were done. 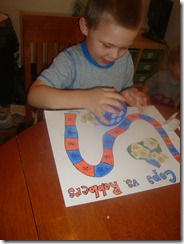 Our stART project (detailed here).  We read The Police Cloud by Christoph Niemann and then did this cloud craft. 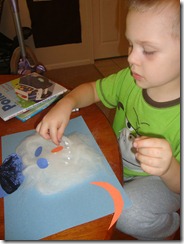 Designed his own police car with shapes.  First I had him color in the shapes, then cut and glue them.  The end result actually does look like a car of some sort! 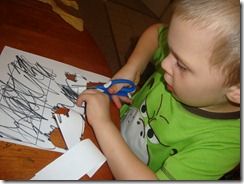 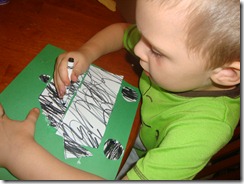 For Baloo’s cutting page this week we used this tracing sheet from Homeschool Creations.  The zig zag was a bit much for Baloo, but it was really great cutting practice. 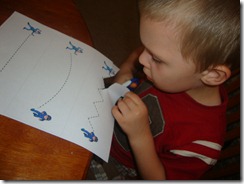 Baloo made a police badge using cardboard and tin foil.  This wasn’t well planned as Baloo cannot cut cardboard, and cannot wrap tin foil without cutting it.  He did write a huge P on it though. 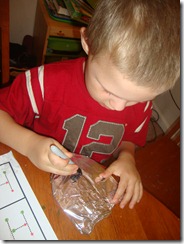 And for our cooking activity this week, we made donuts!!  Because as we all know, cops love donuts! 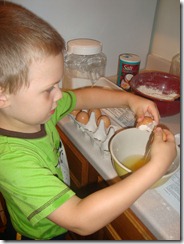 And he poured whatever he could. 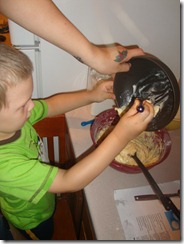 He also helped to count the cups of flour, the eggs, the sugar, etc etc.

For anyone who isn’t a pastry chef, and like me, does not own the necessary tools to insert the jelly, here is my ghetto rigged jelly inserter.  Simply cut a straw in half, and cut one corner off of a baggie.  Insert the straw, and tape in place.  Make sure when you’re taping that you don’t cut off the supply to the straw.  I was amazed at how well this worked! 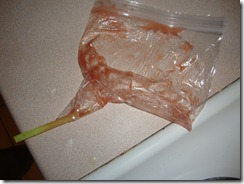 Our donuts!  We did add some confectioners sugar to the tops. 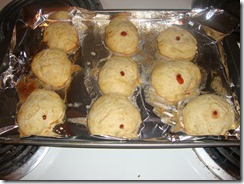 For the record, these were supposed to be round.  We ran out of flour and just made do.  I couldn’t get the dough to roll out so I just scooped it out and we’re having donut cakes instead.

With all the focus on the police theme this week, we did not focus a lot on our RRSP program.  But we’re practically done with H so we’re just tying up ends with that section anyway!

We finished tracing the H’s, read over the memory verse a few extra times, and Baloo did the Honor your Father and your Mother craft.  I think he enjoyed drawing on our hair the most! 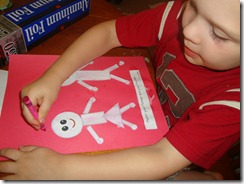 I’ve been wanting to get a pedal-less bike for Baloo for awhile now, but never found the right time.  However, babyhalfoff.com featured the Boot Scoot Bikes last week and I couldn’t resist.  Baloo is pretty much too tall for this bike, but we’ll keep trying until he completely outgrows it!  I’m just hoping that he learns to balance on it before he outgrows it, and then he can ride his pedal-ed bike! 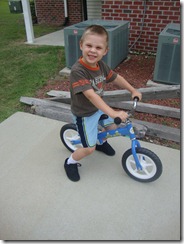 We’ve starting doing sequencing activities out of a book.  When we were done, there was a coloring activity on the other side and we colored it according to the rules – in other words, exactly like the picture. 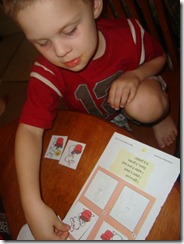 I used as many pre-made resources as I could on this, but I didn’t find most of what I wanted and therefore had to make my own stuff.  Anything I didn’t make, came from Homeschool Creations.

Coloring the cover (This is from Homeschool Creations) 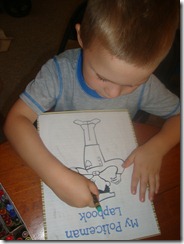 This is a “who did it?” game.  There are 4 suspects, and I give out 3 clues.  Baloo then has to eliminate suspects based on the clues. 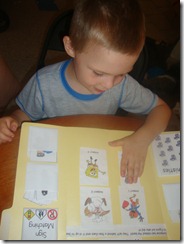 Patterning with cops and robbers 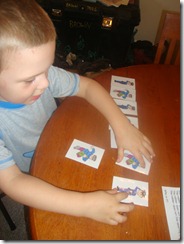 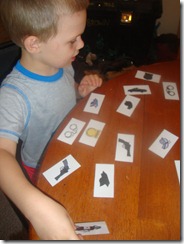 Who is different?  One of the 4 robbers has something changed, and Baloo had to figure out who was different and why. 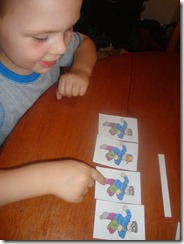 We also have a memory matching activity in there that I didn’t get any pictures of yet.

Make sure to stop by Homeschool Creations to see what everyone else did for preschool this week!